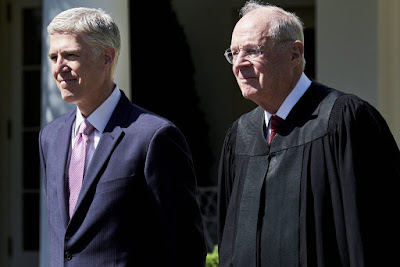 The last days of the Supreme Court's term have been quite successful for conservative causes. And, in the coup de gras, Justice Anthony Kennedy announced his retirement yesterday.

Kennedy's retirement in the middle of President Trump's term is not as significant as, say, a Ginsburg retirement would have been in terms of an ideological shift on the court. Kennedy, a Reagan appointee, was fairly conservative. Yet, he sometimes played the role as a swing vote and was the key player in cases that maintained the status of Roe v. Wade and expanded LGBT rights.  We can expect a Supreme Court that contains Kennedy's Trump-chosen replacement to significantly tilt to the right on these issues going forward.

Many people are upset. Some are concocting escape fantasies in which President Trump is somehow denied the conservative judge he has promised.

That's not going to happen. As the New York Times editorial board astutely observed, the remedy is at the ballot box.

And who will that replacement be? Trump has promised that the new nominee will be from a list he produced last November. That list is set out at the White House website.

One candidate who seems to have a good shot at the job is DC Circuit Judge Brett Kavanaugh, Brett was a law school classmate of mine, and I signed a letter supporting him when he was nominated to the DC Circuit.

But now, the political circus will begin. What will, and what should, happen?

Comments:
As for who should replace Justice Kennedy, Judge Kavanaugh would be a fine choice. I can think of others, too, and I think the list Trump published (assembled by FedSoc, to be sure) is composed of very smart, well-qualified candidates. I personally like former Texas Supreme Court justice and current 5th Cir. judge Don Willett. He is an honorable man and a fair jurist. He is also a character, although his twitter feed has substantially ebbed since he joined the federal judiciary. More than anything, he is from a part of the country not currently represented on the Court, and has a non-traditional (by Supreme Court standards) background, which I value immensely. President Trump should also give close consideration to the very talented women on his list.

But whoever it is, we would all do well to remember that, for the most part, the kinds of folks who serve in the federal judiciary are generally decent and duty-driven, and feel very strongly about the integrity and dignity of the courts and the parties before them, no matter who appointed them. The rhetoric I am already seeing about Trump appointing "another arch white supremacist" to dismantle the civil rights construct erected by the recent Court is deeply troubling. We can disagree about what the Constitution says without resorting to the kind of divisive, hateful invective that continues to tear us apart. We can argue about judicial and political philosophies without assailing the basic human dignity of the "other" side. Of course, that's not what's going to happen. And that is sad.

Agreed about the rhetoric. And for me, the calculus is different than for many, since sentencing issues scramble the usual divides. I won my S. Ct. case on a Scalia opinion that resulted in hundreds of lower sentences, for example.

I hope we'll indeed have RBG for another three years. The recent movie about her was certainly encouraging (and a great documentation of what makes her so important).