(Almost) all the Big Ten mascots in one video? What's not to love?

However, Penn State's mascot (the squirrel-looking thing with the blue-and-white tie as its only piece of clothing) has a less than wholesome vibe going here. While the other mascots are doing mascot-y things with cheerleaders and other students, the Penn State Squirrel Guy is off by himself mowing the lawn and washing his car. What's up with that?

Also one might wonder... where the heck is the Northwestern Wildcat? 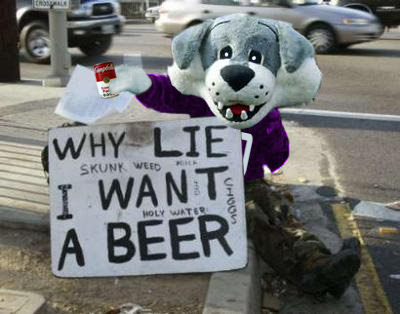 Let's put the mascots in rank order of quality:

Definitely the best dancer of this group, and seems to have a great group of friends. Downside: Lives at Michigan State. Reportedly, he tried to defect to Michigan a few years ago, but Ann Arbor's ban on guns also covers swords.

3) Bucky the Badger
Best use of a state capitol. Seems to know his way around. Downside: Dance at the start reveals that Bucky has no tail whatsoever.

4) Lil' Red, the Nebraska Inflatable Guy
He cracks me up, and can do that bouncing-on-his-head thing. What is he, some kind of giant farm kid?

5) The Iowa Hawkeye
I like the ice skating bit, and he does make a good flapping motion, but doesn't seem to have a lot of charisma.

6) The Other Nebraska Guy
Ok, I'm fond of Inflatable Lil' Red, but the other guy is less charming. Something about that smile...

7) Brutus the Buckeye
Did anyone else notice that he dances like Elaine from Seinfeld?

8 The Penn State Knitting Lion
My Mom, a Penn State grad, tells me that the Penn State mascot is not a squirrel, but a "knitting lion." Presumably, he made that tie/scarf thing himself. Still... mowing the lawn? Car washing?

9) The Purdue Boilerhead Guy and Northwestern's Willie Wildcat
These two did not show, claiming they didn't get a call. Then they produced a make-up video, which shows Willie to be both a little hung over and the last person in the U.S. who uses a pay phone:

Comments:
Congratulations! You have found The End of the Internet. There is nothing more to see.

The Penn State mascot is in 'time out' like the team.

Mark, nothing like jumping (dancing?) to conclusions! Clearly the Nittany Lion was home on summer break assisting his/her family with chores, after another stellar academic year in the rigorous pre-vet program at PSU. By contrast, the rest of the B10 slacker mascots were stuck on campus desperately trying to maintain their questionable academic eligibility with light weight summer school courses

Are you nuts? The Cornhusker Dude is CLEARLY the winner. He's got these BEAUTIFUL women all over him. It takes Sparty a while to get with the program, but he's obviously doing just fine by the end.

Bucky and the rest look like they have no clue. That brown coyote thing gesturing at an imaginary phone at least seems to understand the point of the song, but he's gonna be one lonely mascot.

IPLG, you need to come back to the Midwest to experience some of this ambience...

So Michigan, Indiana, and Illinois don't have a mascot? Why not?

Also, what is this "skunk weed" that Willie the Wildcat is after?

IPLawGuy, you are just jealous. You wish you could be as cool as Bucky Badger. You have tried to mimic his excellent fashion sense, but I'm afraid you've fallen short.

On Wisconsin, by "imitate his fashion sense," you mean the whole dancing-in-front-of-a-stadium-full-of-people-wearing-a-shirt-but-no-pants thing?

Because those charges against IPLawGuy were DROPPED, and you can't really tell in the video who it is, anyways.

Mascots aiming for sex appeal always leave me feeling awkward. (Note that this doesn't apply to cartoon characters, just mascots. See, e.g., Jessica Rabbit.) However, this clip is much preferable to the experience I had at Chuck E. Cheese's a couple of years ago when Chuck sang "Hey Soul Sister" to my daughters and me. The part about his heart beating out of his "untrimmed chest" was too much to bear.

Leave it to architects and my brothers and sisters in landscape design, we create many the setting (stage) for playful lyrics and dance to be performed - and where co-ed 'eye candy' can be touted as an innovative work-out video. Only on campus... and it sure keeps me young (at heart). Well done!

My best and success to all beginning a new semester...