In the comments to Sunday's post, OsoGrande made a reference to Baylor's "Green Bear" mascot, which got me to thinking about that whole thing. Previously on the Razor, I have given a detailed history of Baylor mascots up to about 1934. Since that time, though, things have gotten a little weird. During the ten years I worked at Baylor (which coincidentally, were the dark years for Baylor's mens sports), there were about five different versions of the Baylor Bear rolling around: 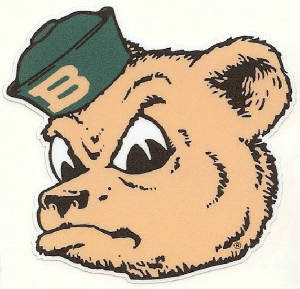 How could you not love Sailor Bear? The jaunty sailor cap, the challenging visage, the bearlike demeanor, and the totally bizarre idea of having a sailor mascot for landlocked Baylor. It made no sense at all-- which meant it made all the sense in the world. Sadly, Baylor apparently does not own exclusive rights to Sailor Bear, so they no longer use him.

Having a mascot floating around without proper trademark protection can be risky. According to one history, Sailor Bear ran into some problems during the war years, "when it was dropped due to the fact that a German U-Boat which terrorized trans-Atlantic shipping was reportedly named (without Baylor's approval, obviously) “Baylorsgebang- bruindasboot,” with a picture of the Baylor mascot stenciled on its side next to the Nazi swastika."

So, what makes even less sense than Sailor Bear? That would be the very odd "Green Bear," which may well remain Baylor's symbol (they do own the rights, after all). Why, exactly, is the bear green? My guess is Aramark food, but there may be some genetic mutation involved, or Waco water (which always turned me a little green, too). 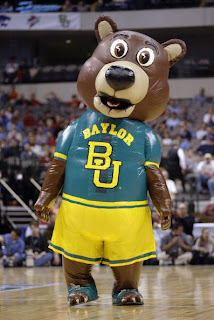 Appearing exclusively at Baylor basketball games, inflatable bear (who was also green) was gigantic and wobbled around unsteadily before performing various antics: pulling his head inside his body, bounding on his head upside-down, appearing to gobble up a cheerleader, etc. 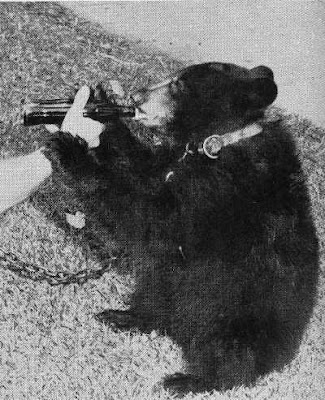 For several decades, Baylor has had live bears living on campus, and at times (many years ago) they were brought out at football games to drink Dr. Pepper to promote one of the team's sponsors. Some people had a problems with forcing Dr. Pepper down a chained bear's throat, so they stopped doing that and now they just stroll about with students and live in a very nice zoo in the center of campus. They are all, like the inflatable bear, named "Judge" for some reason.

Some sources have reported that the new Baylor stadium might contain a glassed-in area where the bears can comfortably watch football games, but others think that money might be spent instead on academics... we'll see. 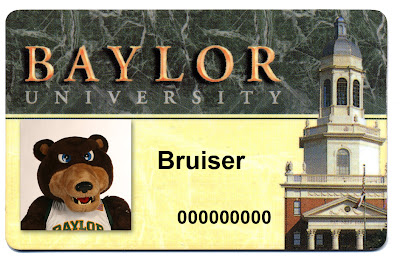 Bruiser appears at many Baylor games-- and, apparently, is enrolled full-time as a student who attends class in full bear suit. At least he is the right color, not too nautical, and eats an appropriate omnivorous diet! Still, he creeps me out a little.

Which one is best? My vote is for Sailor Bear...

Comments:
So you're saying it's a coincidence that your decade at Baylor was also the darkest period for men's sports? And you expect us to believe that, after you leave and Baylor has its greatest sports year ever? What conclusions are we to draw?!

There is also this one:

Which are probably my favorite versions of the Baylor Bear.

Sailor mascots are always the best option. This goes for Baylor's bear, LSU's tiger, and Oregon St's beaver (which, admittedly, makes the most amount of thematic sense). The sailor mascots look awesome.

Inflatable mascots are inherently terrifying. I'd rather be trapped in a cage with the live bears than the inflatable bear. It haunts my dreams, though Nebraska has the most terrifying inflatable mascot. It's like Bob's Big Boy slowly coming to kill you.

Live mascots for the win. Sure, PETA will protest you, but they are really cool. Remember, everyone loves Uga.

There was a minor revolt on campus when they introduced this new logo scheme. They called the Sailor Bear "wimpy" or something like that, which made the 27 students that actually cared pretty upset.

As for my favorite, I personally love Sailor Bear and Bruiser. I don't know that I could choose between the two. Inflatable is rather hilarious, though I wonder if he has a condition of some kind.

The green bear was ushered in right after we entered the Big XII. It was embarrassing and foreshadowed our horrible first decade of Big XII play. It exemplified that Baylor's leadership at that time didn't understand what it took to be a first class university.

All copies of the green bear should be burned, then their ashes buried in Hell (aka College Station).

You have to go with Sailor Bear.

The Professor leaving and the athletic team's ascension in the polls calls to mind a recent slogan: Change We (the fans) Can Believe In... Dump the Dr. Pepper and consider the benefits of fresh spinach and 'Green' Giant as a corporate sponsor.

Baylor's new found athletic strengths harken to another sailor who wore his jaunty sailor cap with the same tilt and swagger - and who also loved spinach. Popeye and Sailor Bear roaming the sidelines would be the perfect 'Dynamic Duo!'

I have heard the Batman series movies will next be starting over. Baylor already has Sailor Bear - add Popeye and a movie script may be on the horizon in time to christen the new football stadium...

I should consider changing my practice of no internet activites during long holiday weekends - I miss to many good discussions...

As the topic of the day seems to include color, may I include a comment to PTC's wonderful question:

What about the disappointments that don't lead to anything?

Life’s journey is a sojourn through light and darkness, experiences more defining than perceived. We can harden our hearts, unable to accept, embrace and share all that is encountered. Walls and barriers erected to protect often hold back the light resulting in a darkness that diminishes sight, sheltering us from experiences intended to nurture; holding us fast to known valleys blanketed with shadows – adding crayons to our coloring box representing the sullen shades of life.

Or we can embrace our new todays with an open heart, letting light shine through, courageously experiencing life in the moment, nurturing with reverence all its brightness. We can add an array of crayons, the addition of white, creating tints not shades, savoring moments experienced in the light - crayons representing the peace, happiness and joy of life’s journey.

When light shines brightly, illuminating the spectrum of colorful experiences of life’s journey; we will have more crayons to color with, more treasured moments to share. We will enjoy abundance, secure in the knowledge more will be given, that His blessings will continue, adding more crayons to our coloring box.

I don't know if New Christine was joking when she said Baylor should dump Dr. Pepper, but some things are just so sacred they shouldn't even be joked about.

Dr. Pepper is as crucial to the foundations of Baylor as God, Aqua Buddah, bears named Judge, the NoZe Brotherhood and the Baylor Line. Dr. Pepper forever!

Just playing with all the Baylor Bears and Alums...

I would not survive many a 16-hour design marathon without my Diet Dr. Pepper and handfulls of Hershey's Pieces (milk chocolate with almonds)

Truly, there is something rich and heartwarming about a blog thread about Bear mascots, in this otherwise busy and serious world. Thanks. It's been a day filled with challenge.

I'm 75 years old, and the Baylor "sailor" bear was the bear I grew up with. To my knowledge no one referred to it as "the sailorbear," just the Baylor Bear. It was, and always has been my favorite mascot/symbol of Baylor, and I sincerely hope those of you who over-analyze the subject
would not be SO critical of my favorite Baylor Bear.
Sic 'Em Bears !!

I'm 75 years old, and the Baylor "sailor" bear was the bear I grew up with. To my knowledge no one referred to it as "the sailorbear," just the Baylor Bear. It was, and always has been my favorite mascot/symbol of Baylor, and I sincerely hope those of you who over-analyze the subject
would not be SO critical of my favorite Baylor Bear.
Sic 'Em Bears !!

There is a school in Ohio that has had the green bear mascot since way before the 80's. Just saying.

There is a school in Ohio that has had the Green Bear as their mascot since way before the 80's.
Just saying.