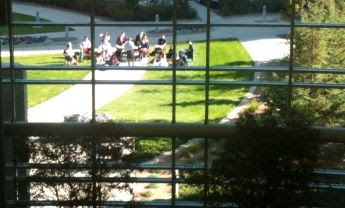 Today at St. Thomas, we are having a great forum on presidential powers featuring a number of great speakers which include not only St. Thomas's Michael Paulsen (shown here teaching outside today) and Robert Delahunty, but Akhil Amar from Yale Law and John Yoo from Berkeley.

Because Profs. Yoo and Delahunty worked in the Bush administration and wrote some of the controversial memos on presidential power, we expect that protesters will appear at the school in the morning. Their point, as far as I can gather, is that the two professors were wrong and even criminal in their actions within the Bush administration, and should not be allowed to speak.

One of the reasons we have an academy is to allow divergent views to be heard. If people disagree about important issues, we debate them in classrooms and on stages, rather than in the streets. It's an amazing and wonderful process, a way of getting to truth. Within this process, it is most important that we hear from those we disagree with the most, and that the most sensitive issues be raised.

There is something just sad about such protesters who clearly want to silence someone. I went out to talk to some of the protesters last month, actually. One of their frustrations is that they are not allowed on the stage with people like Yoo and Delahunty.

I'm kind of an iconoclast, and I understand the urge to shout. However, the love of ideas leads me to favor my urge to listen and discern. Shouting at an exchange like this one comes off not as a protest at one side's ideas, but at the process itself (which, in fact is what will literally be protested and yelled at). I love this process, and I hate to see it debased by those who prefer to hear neither Yoo nor Amar, nor, in time, me and those with whom I disagree.

There are things to rage at. Civil discussion is not one of them.

Comments:
What is worth protesting then?

It's not "protesting" that's the problem, Anonymous. It's perfectly fine to protest Yoo. Were I a St. Thomas student, I might have written a letter to the editor of the school paper, or even sat with a sign outside the room, not to try to silence Prof. Yoo (which is bad) but to make it known that I disagreed with him and exercise my right to free speech.

The cure for speech with which we do not agree is not to silence it, for that legitimizes it and de-legitimizes us. Instead, the cure is "more speech."

But it sounds like these protestors are going about it the wrong way. Rather than making their opinion heard, they want to try to keep people from hearing another opinion. And they have no right to expect to be on stage with someone like Prof. Yoo. If the ACS or whomever wants to stage their own panel sans-Yoo and with a heavier liberal lean, then they are free to do that... but they can't dictate the format or content of someone else's assembly.

That said, anyone else follow the SCOTUS arguments about the Westboro "protests" today?

What about protesting at military funerals?

The general rule of thumb should be that it's probably not a good idea to try to silence a guy who wrote memos in support of waterboarding.

I find the Westboro stuff to skirt the line. Some of it is protected, most of it (I think) should be deemed obscene. But attempting prior restraint on those guys lets them file suit and fund themselves via damages. Starve the beast, I say.

I have recently heard from people with whom I am friends, but from whom I would distance myself politically, that the "mosque" (Islamic community center) project near G0 is an example of religious fanatics hiding behind a constitution they despise in order to orchestrate an offensive, insensitive act which should not be allowed to proceed. While I would take issue with their argument insofar as it applies to the relatively innocuous community center, I would emphatically apply the same argument to these truly extremist "Christians" who protest at military funerals. Fred Phelps and his family cult represent the definition of public obscenity. Not only do they fire off hate speech and slurs, but they defame the dead as their loved ones grieve nearby. I cannot comprehend a moral, ethical, religious, or constitutional justification for their actions.

I think this discussion demonstrates perfectly the apparently differing approaches to the legal instruction taken by Baylor and St. Thomas. During my time at Baylor, the professors seemed to focus primarily on teaching students to how gut their opponents in the courtroom and win their cases. I am thankful everyday for the very practical instruction regarding I received. My professors taught me how to persuade with the law.

I must admit, though, a feeling that something was missing--the opportunity to regularly listen to debates and intelligently discuss opposing views on what the law is AND should be. Baylor failed at developing these conversations, which are beneficial in at least 3 ways: 1) in helping students understand why we have the rules we have, 2) in helping students understand how certain positions they take will affect lives of individuals nationwide, 3) and in helping them decide whether the greater good is served by advancing certain positions.

Yeah, sure, we advance our clients' interests and not our own. But, c'mon, we have to recognize a deeper responsibility to society to generate law that advances the greater good, not law that sacrifices the greater good for the benefit of a particular client. I fear our selfishness causes us to bill hours advancing positions that we don’t think should stand. It takes courage to send a paying client away because the legal arguments necessary are personally or generally held as repugnant, especially when we think we might win anyway.

I am willing to recognize that two reasonable minds can disagree about what the law should be. I'm really only writing about how I wish Baylor would have done a better job at helping lawyers recognize these issues, ponder them, then decide whether to advance an argument to important levels after thoughtful deliberation regarding its likely effects on individuals other than the paying client.

Regarding the funeral protests: Protected by free speech, so the Government can't regulate the content of the speech in a public forum. I have no problem, however, with allowing a private citizen to take action against them for intentional infliction of emotional distress. The Constitution's barrier against government punishment for speech is not a shield against tort liability.

The Yoo protesters do NOT want to prevent him from speaking. They want him indicted and behind bars for "legalizing" the torture of innocent human beings, including children. Yoo's actions, not his opinions, are criminal and accountability is needed. When you make this issue about free speech and academic freedom you mis-frame the issue entirely. Yoo is free to speak, write, teach-- but he must be held accountable for complicity in the crimes he advocated, as lawyers were at Nuremberg.

True, the protesters do want to see him prosecuted under some legal theory. But they also want the school to disallow his participation in a discussion.

The discussion here (at least originally) isn't whether he should be prosecuted, but whether the discussion of his ideas, presented with a concurrent rebuttal, should be banished. It's not about justifying his behavior; it's about promoting the open discussion of opposing theories so that students can learn from the dialogue.

That's how the issue was framed. I don't see a thing here that trivializes what happened to detainees.

I'll bite. I'm a prosecutor. I can bring stuff to a grand jury.

Convince me. What should I attempt to indict John Yoo for?

I don't buy it. What you were protesting was an academic discussion. You can't get around that.

Prof. Yoo expressed an opinion in those memos. What "action" are you talking about? I'm not aware of him either authorizing anything or taking any direct action.

There is torture going on right now in this country. There are malnourished children, sexually abused children, and neglected elderly people all around you. It is sad that what you choose to do is focus on picketing academic discussions instead of taking on torture that is in the here and now. The world could use your energy, unharnessed from hate.

How is wanting Yoo held accountable "hate?" Terrible things ARE happening in the U.S. and elsewhere, but are you saying that means we should sweep Yoo's crimes under the rug? You're not making sense. Yoo played an active part in formulating U.S. torture policy (read his books!) He conspired to commit torture, which is illegal. He committed intentional professional misconduct, according to the DOJ's own investigation. An Office of Legal Counsel memo has the force of law, and while Yoo was covering Cheney and Rumsfeld's asses, he still contributed to the torture and death of many, including children. I'm not wrong to care about this and to work for his prosecution.

It seems that in the here and now, your problem is with John Yoo not being prosecuted. If this is your goal, there are a few problems with trying to get there by picketing academic events.

First, the decision-makers you want to affect simply aren't there at an academic panel. There were no prosecutors with that power at the event you tried to disrupt. If that's who you want to affect, you need to direct your rage at them. Given that your goal can't be accomplished by your actions, you seem to just want to vent. That's your right, but don't pass it off as trying to change anything in an intelligent way.

Second, if what you want is prosecution, you are unlikely to sway lawyers with that power with statements like "OLC memos have the force of law," which simply isn't true.

Third, you already have a prosecutor saying "I'll bite. What should I prosecute John Yoo for?" If you are serious about the goal you claim, then identify a statute, describe the elements, and then describe how Yoo's actions violate that statute. In so doing, please remember that US prosecutors can only indict under American law, not international laws or treaties.

I'm convinced Yoo was wrong, but not that he has violated any penal law. It's not a crime for a lawyer to give honest but wrong advice to his clients.

But I'm open to persuasion.