As promised, this morning I went to Ted Nugent's garage sale, and it was excellent. As one might imagine, there were a wide variety of dead animals for sale, including a gigantic rhino head (visible in the background in the picture above. Surprisingly, though, the offerings weren't limited to heads n' racks, but extended to Terrible Ted's living room furniture and clothing. He had a lot of used shirts for sale, but they seemed a little too... used, for the most part.

Some of my favorite items available included a Simpsons DVD box set, goofy tennis shoes, several classy paintings depicting animals one can hunt, a giant pile of various shoelaces, a math textbook, and a super soaker squirt gun. The prices were actually very reasonable, and I would have bought more if I had more room in my car. As it was, my total bill was $21. I got the following: 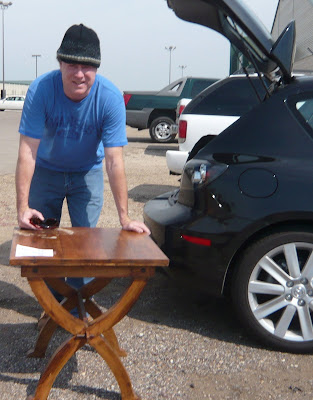 As I paid for my purchases (the coffee table was originally going for $45, but I got it for $15-- thanks, Blaine McCormick!), I was told that the coffee table was kept next to Ted's couch where he watched tv. He kept his radio on the table and the batteries leaked, and that's why it needs to be sanded and refinished. It is an outstanding table though-- solid hardwood, and not a bad design. Once Wayne the Builder is done refinishing my guest house, I'll put it out there.

It was my favorite garage sale ever.

All of which raises an interesting thought-- if you could buy stuff at any celebrity's garage sale, which celebrity would you pick, assuming there were reasonable prices and good variety?

Comments:
Dee Snyder. That one was easy.

You didn't buy me the rhino head?? I am hurt. Deeply.

I'm actually sort of curious to see what I could find in Sean Connery's garage sale.

Also... rhino head? No wonder they're endangered. The Nuge is on the loose!

I know this sounds strange, but I would want to go to Madonna's garage sale. I'll bet she has some really weird stuff.

ow much for the rhino

But did you meet The Nuge?

I'd bet Stephen King or Anne Rice would have some GREAT stuff at a garage sale.

I love that the Nuge rented a building at the fairgrounds and had his sale ADVERTISED ON THE MARQUEE! If you need a post for your "That's So Waco!" column, you need look no further.

That dancing guy from Six Flags. I'll bet he has some weird stuff!

Van Morrison, no question, among musicians. He doesn't do autographs (much), so a lyric sheet or something would be way cool.

Failing that, the MC5's ear plugs (I suspect they'll be like new.)

Hey Spencer has a hat like that... When he is out of earshot I call it his "Stoner Hat", because when he wears it, to me he looks like one of those stoner snowboarder kids you always see here in the Pacific Northwest hanging out at like REI you know? But its a nice hat.

Well, if he were still alive, I am sure Bill would pick John Lee Hooker's garage sale.

THere are so many garage sales I woudl go to, but probably Ina Garten... She is The Barefoot Contessa, named after her show on the Food Network, and also after a specialty food store she had in the Hamptons for years. I would get there very early to maybe pick up a really old Viking cooktop or maybe some of her old All Clad or Le Creuset. I have some of my own All Clad that I got from my wedding but Bill has wrecked it all with his "cajun" (burned) cooking. One pan is actually WARPED. Another is so bent that is simply spins around on the flat glass stove we have at the goat farm.

Bill would also go to Eric Clapton's garage sale I am sure.

I am surprised I did not say Martha Stewart's garage sale but I have like a mental picture of buying something "Bee Utiful" and getting it home and finding like a human head in it or something... like in Silence of the Lambs.

I'm really sorry to hear that Bill died. It has been a hard year for you!

Eric Clapton has probably sold all his stuff twice or given it to ex-wives.

Jimmy Page must have an interesting garage.... Wonder if he still lives in Alistair Crowley's castle.

Bill is not dead. John Lee Hooker is dead. Van Morrison was at his funeral.