Fashion Night-- Still Famous! (Plus, in the comments section, an oddly complex soup recipe from Tyd) 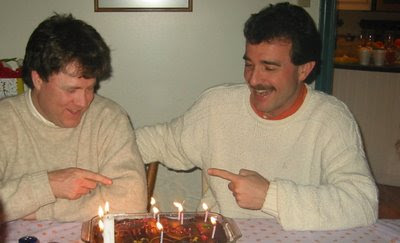 I just noticed that fashion night at Baylor is a featured story over at JDJournal.com. JDJ seems to be, um, more interesting than most legal journals, given that the lead stories (other than fashion night) are "Attorneys & Crystal Meth," "Sex and Power in the Legal Profession," and "Transgendered Attorneys." Hey, now! Shouldn't they be covering the coke-addict stripper/copyright infringement story?

No, I think that's the photo of the transgendered attorneys from the magazine.

Or maybe its the Meth-heads

No, it's Osler being interviewed for 20/20 by John Stossel. The cake has a candle celebrating each blog operated by or on which Osler comments. ---Celebrity Luvr

CL, shouldn't you be putting that in the form of a Haiku?

It was time to branch out.--CL

It was time to branch out.--CL

Wow, JDJournal is enough to make me want to go to law school. Those headlines draw you in. If I can free a 14-year-old sex slave from India by going to law school, that sounds like an appealing profession.

I think the article is actually about how lawyers often have 14-year-old sex slaves. It's sad, really.

And boy that nude skinny lady is really creepy!

Here is my soup recipe. In case you needed it for fashion night.

Make the soup kits & keep in fridge until ready to cook, then one morning put it in and at the end of the day you will have soup! You could even make a bunch of soup kits and freeze them. I make four soup kits at a time, make four batches and then Freeze it all in 2 - 3 cup portions in qt ziploc freezer bags. Note: I do NOT use potatoes in this soup. They do NOT freeze well at all. You CAN do this recipe on the stove top in an 8 qt stock pot, but you must watch it carefully and stir it frequently. In a larger pot you can add even more vegetables. It is done when the hardest vegetables (broccoli, carrots, Brussels sprouts) are tender but not mushy. DO NOT over cook. Be creative and add weird things - whatever you like! I like to make a whole bunch of this at once, every couple of months. It is a delicious, and very nutritious & low fat (except for the meat) meal!

Soup Kit:
put in qt ziploc, place in fridge: one lb. of cut up stewing beef - OR CHICKEN! Or meatless!

Put all of these ingredients in gallon ziploc & place in fridge:
Half of a 16 oz bag of baby carrots - slice them @ 1/2 inch
1 half big white onion - chopped
Half bag of fresh broccoli florets - cut a little smaller
Half of a large box of fresh mushrooms (sliced up)
1/4 small pkg.of fresh pea pods - sliced 1 inch
4 cloves chopped garlic
1/2 red pepper cut in 1-inch chunks
1/2 green pepper cut in 1-inch chunks
Optional:
Asparagus tips from about 8 stalks - if in season
1 zucchini sliced and halved if in season
Brussels sprouts if in season
I don’t like cauliflower, but you can use it! Be creative! Use whatever things you like!

Place all of these ingredients in large ziploc & freeze:
1/2 of a 16 oz bag of frozen corn - you can cut fresh off the cob if in season
1/2 of a 16 oz bag of frozen green beans - you can cut fresh if in season
5 oz frozen chopped spinach - frozen is best - I just saw a 10z pkg. in half with a bread knife
Optional to taste: 5 oz frozen lima beans or canned garbanzo beans, drained

When ready to cook:
Take fresh veg & meat out of fridge & Frozen veg out of freezer. Set aside.

Make sure all of the tomato paste is dissolved or it will clump at the bottom and burn. NOTE: I like it "tomatoey" but you can use less of the tomato ingredients

Put tomato mixture into crock pot
Put all meat into crock pot
Put all fresh/frozen veggies in, then fill with water until the liquid reaches the top
Put on the lid and cook for 8 hours on low. Taste some and add salt and pepper to taste. Maybe throw in some fresh parsley chopped. YUM!!!! Eat some, freeze some, give some away!

I thought you only cooked up meth, Tyd.

That's a lot of work for soup! What is this new kitchen like????

GAWD the new kitchen it was only 4 years old... so we are not replacing really the cabinets or the appliances really. Just new paint, countertops and floor and also backsplash & a range hood instead of that stupid microwave over the stove thing that DOES NOT remove the fumes.
They have not even installed the counters yet they are coming to template for the granite in two weeks. then we will be WITHOUT a kitchen like for three weeks... its going to suck because we have already have the downstairs bathroom out of commission, and in a week the two upstairs baths are going to be out.

I have always made this soup. Its really great and when you make a ton of it and put it in the garage freezer thingy, its great for a lunch, or a snack or a dinner or just whatever. Its FULL of vegetables, low in fat, high in nutrients... AND its the ONLY THING I have ever made that EVERYONE loves. My cooking sucks, and my mother's cooking sucked, but she developed this recipe. Its awesome.

Here is the deal: it is a PAIN to make it - so I like to make a TON of it at once so I only have to do it once in a while. It freezes with NO PROBLEM.

I am insane. There is a piano in my kitchen. There is a old Hammond B-3 organ that has been made into a desk in the dining room. There are guitar parts and toys all over my house. the laundry room is full of crap. I do not know where ANYTHING is right now. When I get stressed out I seriously make soup. I made soup for like 5 weeks after my mother died.
In the last two days I have made lentil, split pea and now I am on my second of four batches of the veg beef. Some people drink. I get out the crock pot, make way too much soup, freeze it and then give it away to people.

Its kind of like that movie BABY BOOM when DIane Keaton moves to the country because it will be better for her baby. Then she starts making apple sauce and she cannot stop. In fact I think I MAY BE that woman, except I never went to Harvard, etc BUT like her, I really never miss a concert my plumber plays in...

I forgot say to put in a cup of frozen peas also.

The exchange in my head when I saw the picture was:

Oates(from Hall and Oates): "No, YOU'VE got a great beige sweater!"


and so on and so forth.

V.R.-- that's almost exactly what we were saying, except that the sweaters were "taupe."

You guys DO kind of look like Hall and Oates.

Osler have you ever told the bloggers about the Grosse Pointe Connection to Hall and Oates? ABout their gig from HELL in the early eighties?

What? Hall and Oates in GP? Was that at the Punch and Judy?

For those of you non-GPer's, the Punch and Judy was an old movie theater in the middle of town. In 1978 there was this guy who was the local Ronald McDonald Hamburger Clown who also booked bands into that theater (presumably not in costume). He got U2, Devo, Wham UK, the Pretenders, the Talking Heads and others when they were still on the rise.

Then they closed it and turned it into an office building.

Kind of like the way John Cusack's home became a Quickee Mart?