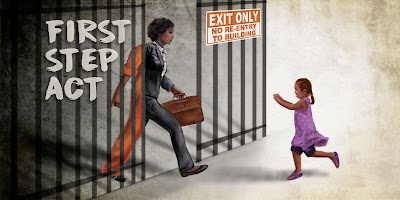 Yesterday, President Trump announced his support for the First Step Act, which is on the verge of being taken up by the Senate (much of its primary substance was already approved in the House). Though it does not contain everything that advocates might want, it is an extraordinary move in the right direction, and contains several provisions that I have hoped would make it into law for a long time.

So what all is in there? Recognizing that changes can (and likely will be) made before the First Step Act becomes law, here are some of the primary provisions in the current proposal (based on a draft obtained by the New York Times):

Title One: Data-driven programs and assessments

-- Directs the attorney general to develop a "risk assessment system" for prisoners, which will be reviewed annually. This system will guide placement, housing, and eligibility for programs

-- Slightly alters the way good-time credit is counted, to the advantage of prisoners.

-- It also creates an "independent review committee" to review the development of the risk and needs assessment system.

-- With exceptions, bars the use of restraints on prisoners who are pregnant. This goes beyond banning the use of shackles while a prisoner is giving birth, and extends from when the pregnancy is confirmed to the conclusion of post-partum recovery.

-- It broadens a "safety valve" provision that allows a defendant to escape mandatory minimums, and gives judges a little more leeway in employing the safety valve.

-- It prevents the stacking of gun counts enhanced under 18 U.S.C. 924(c) unless there is a conviction for the prior gun count. Currently, if I am carry a gun three times during a drug trafficking crime (say in a series of drug sales to an undercover officer), prosecutors can charge the counts such that the first gun carries a mandatory minimum sentence of 5 years, the second 25 years, and the third 25 years, so that they "stack" to form a mandatory minimum sentence of 55 years-- even for a first conviction. I think they should call this the "Weldon Angelos Law."

-- In 2010, Congress passed the "Fair Sentencing Act" (thanks, Nkechi Taifa!), that reduced sentences in crack cases. It was not made retroactive. This bill would fix that, and allow crack defendants to be resentenced under the current, less severe, mandatory minimums and guidelines. This is a great development; it is profoundly unfair to have denied prisoners this ability for the past 8 years.

Title V: Miscellaneous Criminal Justice (It really is called this!)

-- Subject to some restrictions (and these could be significant loopholes), the Bureau of Prisons is required to "place the prisoner in a facility as close as practicable to the prisoner’s primary residence, and to the extent practicable, in a facility within 500 driving miles of that residence."

-- Promotes the use of home confinement where the prisoner is eligible for it.

--  Strengthens and broadens requirements that prisoners be provided with identification documents before release.

-- Broadens markets for prison industries while requiring study of the effect this has on private-sector competitors.

-- Establishes pilot programs in (1) mentorship to youth, and(2) service to vulnerable animals.

-- allows more money to be spent on adult/juvenile collaboration programs

So, what have we got here? It seems like there are four separate threads that predominate:

1) A move towards data analysis as a tool for making decisions about those in prison and returning citizens who have completed their sentences;

2) A few provisions go directly towards respecting (in relatively modest ways) the human dignity of prisoners;

3)  This legislation recognizes that the BOP needs some monitoring; and

4) Files away a few of the harshest edges of sentencing law and practice.

That is all good. One major criticism: Many of the changes are not retroactive. That means that people will remain in prison even though they would be out under current law. That's unfair-- in the words of sentencing geeks, it creates an unwarranted disparity. Which in turn means that reforming the clemency system remains important, since that will be the only way to address that disparity and help people serving sentences far longer than they would receive under current law.

Comments:
Thanks Mark for the shout out that we still need clemency. It's a great bill, but won't give one day of relief to any nonviolent marijuana offenders serving life sentences. Unfortunately, when it's passed, many will think the work is done. Beth