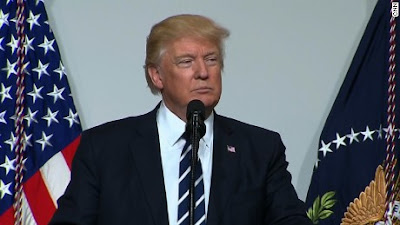 So, pretty much for the past few years, President Trump has had the following takes on things:

Yesterday, in one fell swoop, Trump reversed course to these positions:

I realize I might be over-simplifying some here-- but not by much. Here is verbatim what he said about NATO: "“I said it was obsolete. It’s no longer obsolete.”

Some people think these changes reflect what is dangerous about Trump, but I'm not sure I have a problem with him changing his mind about some things. A lot of the positions he put forth on the campaign trail were unrealistic, dangerous, or both. Moving away from them is simply prudent.

Comments:
The man-child speaks when a wise man would keep silence. Turmoil in positions is not the way to seem wise.

Flux, ,Fluke ... He will vacillate from day to day until this is over. His poll numbers went up so he is happy for the moment.

We might give an "ordinary" president credit for moderating from his campaign under the weight of the presidency, but Trump's blunderbuss style is so unpredictable that it's hard to know whether any of this is a pivot to the middle or simply a response to something he heard on Fox & Friends (which one is the fox, anyway?).

But assuming for the moment that there is a strategy here, it might make sense. Trump's provocative positions, at minimum, allow him to negotiate back to a solution that works. After all, Russia and China basically ignored the Obama administration and its predictable, moderate tone. Now--reportedly--China is amassing troops on its border with North Korea in response to DPRK's recent saber rattling. We'll see what happens with Russia (particularly in the Middle East), but Trump's Syrian airstrike and NATO nations' signaled willingness to meet their spending obligation may accomplish more than feckless line-drawing. Illegal southern border crossings, too, are at a modern low. No doubt due to the deterrent effect of Trump's positions on immigration.

I'm not saying this is a good or wise strategy. It's basically the same one North Korea relies on when it shoots missiles into the Sea of Japan. But we already have ICBMs...so maybe it will work for us?

The Republican President Donald Trump remains unchanged. He is who he is. He says and does what is in the best interest of Donald Trump.

What is best for Donald, at the moment, is to let the large contingent of capable people, especially in the State Department, do their jobs. They are informing him the facts of governing. He, for the moment, is continuing the Obama Presidency.

It will come to an end. He will eventually replace them with partisan,incompetent party hacks. He will probably return to his party's agenda.

Forceful posturing will certainly work politically for Donald but not for our country or the world. Doing whatever it takes to look like a winner is not prudent.

I agree with most of what's been said, except for the idea that Trump will return to his party's agenda.

At this point there is no GOP Agenda! I guess there's broad agreement amongst GOP elected officials that abortion is bad and guns are good. Even no new taxes is no longer an article of faith.

I love reading Talk of the Town in the New Yorker. It always offers an interesting analysis, comment or opinion on current events. It was just a week after The Donald's anointment when I found myself reading a well written analysis of something that felt like it happened a thousand news cycles ago. Despite the good points made in the comment I must admit I was deflated, like reading yesterday’s menu specials. It happened again the next week, then again and again. Unfortunately upside-down day looks more like the new White House alternative reality and what you think may go your way today, think again tomorrow.