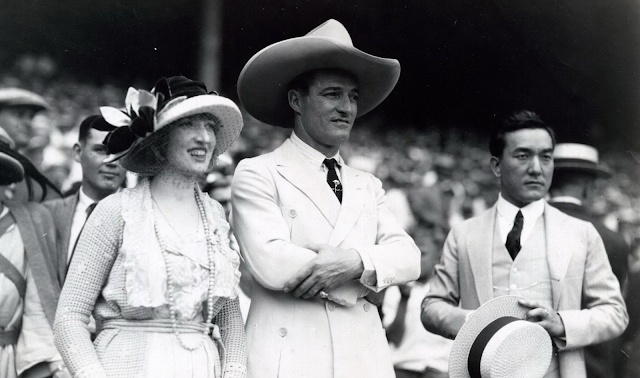 One of my favorite movie stars is also one of the first: Tom Mix, a guy who played mostly cowboys in 291 films beginning in 1909. He wasn't really from cowboy country-- he grew up in north-central Pennsylvania, north of State College-- but he was a good horseman and definitely looked the part, and spent some of his young life in Guthrie, Oklahoma. The film scene had not yet migrated to California fully, and many of his early movies were filmed in Las Vegas, New Mexico (yes, the other Las Vegas).  He was usually featured along with "Tony the Wonder Horse," his trusty steed. He primarily made his home in Prescott Arizona, moving there just as Arizona achieved statehood. In truth, the Old West depicted in movies overlapped with those who first played Old West characters in the movies.
Among others, Mix was an influence on John Wayne and Ronald Reagan, both of whom adopted some of his on-screen characteristics.
Only about 10% of his films are available, many of them lost in a 1937 vault fire. It's shocking to realize how easily the earliest examples of this art form were destroyed in whole.
# posted by Mark Osler @ 1:00 AM

Comments:
Here's a piece of trivia for ya: Mix was a pallbearer at Wyatt Earp's funeral. In his later years, Earp either lived in or spent a lot of time in the Los Angeles area, and he and Mix became friends.