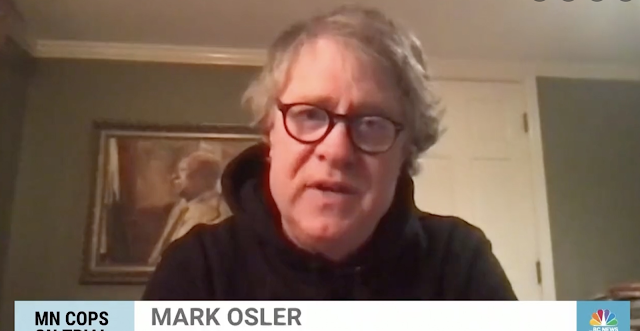 There has been a lot of interest in the trial going on here of former Minneapolis Police Officers Thao, Kueng, and Lane, who are implicated in the murder of George Floyd. It's a fascinating case-- in some ways more interesting than the Derek Chauvin trial-- and I'm getting a lot of chances to talk about. There was the New York Times on Monday, NPR's Morning Edition on Monday and Tuesday, and some others. I'm very interested in the way this case is about what people did not do, rather than about what they did do. By going to a duty to intervene, it brings police culture front and center in a way we have not seen before.
On Sunday night, Shaquille Brewster from NBC wanted to talk about it via Zoom, which I was happy to do. I guess I didn't think through that this was maybe going to end up on television, which is how I showed up on MSNBC the next morning in my Wisconsin hoodie and looking pretty much like I had been awakened from a nap. But my dad's painting in the background looks really good!
# posted by Mark Osler @ 1:00 AM