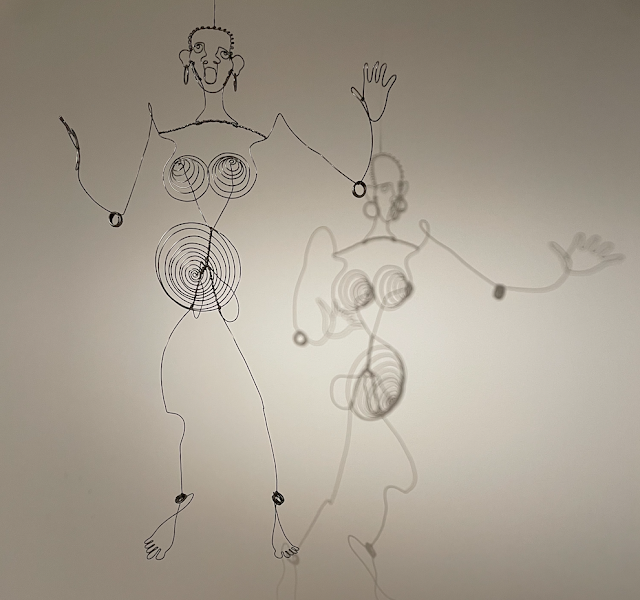 The Picasso wire sculpture pictured above is kinda scary, isn't it? There is the skeleton aspect of it, of course, and the shadow on the wall behind (at least as it is currently displayed at MOMA in New York).  The subject, too, seems to be screaming, or at least surprised.
Or maybe not. It's just as as much a joyful reflection on the human form constructed in an awkward way that emphasizes the liminal nature of our bodies, on that boundary between our consciousness and the physical world. It is more real than real, and there should be nothing scary about that.
But that's the deal, isn't it? Things that are scary to us are not the ones that are outlandish; they are the things that hit closest to the real things in our life. A movie where the bad guy slowly slides open a sliding door is scary because it is so close to the things we worry about: did I lock the sliding door? No one is really scared of Darth Vader, not in that same way, because he is nothing close to what is scary in our real lives.
I think something like that explains the power of Jesus, at least as he is actually depicted in the Gospels. Most of what he does is understandable, close to things we experience in our own lives. He makes breakfast for his friends. He encounters people where they are: at a well, in the Temple, at the bank of a river. He walks, and eats. His parables are not about blinding flashes of light in the sky, but about going to work or going to a wedding. And in that is part of the power of those stories.
How else would we learn?
# posted by Mark Osler @ 1:00 AM