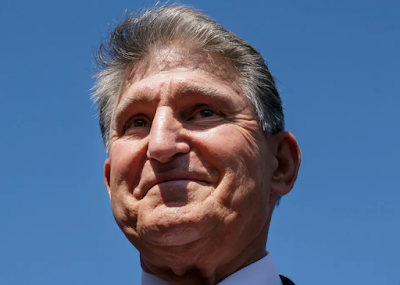 In a US Senate that is divided 50-50 between Republicans and Democrats (including the two independents from New England who caucus with them), West Virginia Democrat Joe Manchin is a vote that Democrats need-- and often don't get. Most recently, he has used his clout to remove climate-change protections from the ginormous "Build Back Better" bill that includes a wide swath of proposals.
There are two things about Manchin's positions that seem true:
1) He genuinely believes in these stances, and has long held views that cut against environmental protection and abortion rights and many social benefit programs.
2) Most of the people in his state, which Trump won in 2020 by almost 40 points (!) agree with him.
Given those two facts, he is not changing any time soon.
So why does he stay a Democrat? In part, I suspect it is exactly because of the power he has in this moment. Since the days of Sen. Robert Byrd, West Virginia had been a disproportionate recipient of federal programs because of the power of its senators.
I suspect, and hope, that IPLawGuy has some thoughts on all of this...
# posted by Mark Osler @ 1:00 AM

Comments:
Ha. Sorry for the delay.

Manchin DOES believe in the power of government to help. His views would fit right in with the Democratic party of FDR and LBJ (and JFK, whose victory in the W.Va. primary helped cement his nomination). But he also wants to keep and hold power.

And as you said, he's been consistent. Protests, tweets and the gnashing of teeth aren't going to change that. It's like complaining about gravity or the sun rising in the East.

The solution for pissed off "progressives"? ELECT MORE DEMOCRATS!!!!!

So, how to do that? Simple: Prove to the voters of places like Pennsylvania and Iowa where there are elections for Senator next year that Democrats deliver, as opposed to dither. Pass substantial legislation that has positive impacts on people and they will notice and reward you. But if you pass the legislation at the last minute before an election, no one will feel the positive impact until its TOO LATE.

This was Obama and the Democratic leadership's biggest mistake in 2009-2010. They screwed around with healthcare for a year plus before FINALLY, in agonizing fashion passing it in March 2010, WAY TOO late for voters to see the benefits before the 2010 midterms.

Bush 41 made the same mistake with his budget deal in 1991- Clinton ran against him based upon Bush breaking his "No New Taxes" pledge. Clinton's theme was "It's The Economy Stupid," which was smart, as the economy looked anemic and weak -- until the week after the election when all the numbers came out rosy and positive.

On the other hand his son, and Reagan, pushed their big legislation through right away and for better or worse, they were able to run on the results in the midterms.

Sadly the Bernie Bros and other Progressives seem to be caught up in some cloud cuckoo land where they can bend the rules of time and space. They should have accepted the half a loaf in the Spring, passed these bills and reaped rewards and then ran on the results.

But instead, the GOP will run against the Democrats as disorganized, amateurish, proto Marxists who argue over minor policy details.

And it will probably work.