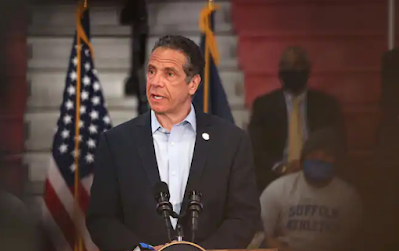 The allegations of sexual harassment against New York Governor Andrew Cuomo seem well-founded and really disturbing. I mean, really-- forcing kisses on a State Trooper assigned to your detail???
Now it is coming out that the ham-handed cover-up was pretty unsavory, too, focused on smearing the women who accused him of misconduct. Nearly every Democrat in power, including President Biden, have called on Cuomo to resign.
That makes me proud to be a Democrat. Unlike Republicans in power who too often rally behind colleagues no matter how awful and grotesque (especially in regard to Donald Trump), there seems to at least sometimes be principles at work in how many Dems approach these issues.