PMT: It's looking good for Amtrak! 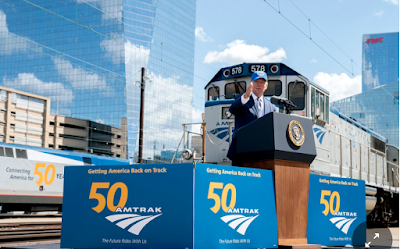 As the Biden administration settles in, one thing is clear: He is pretty much the same guy he always was: Not big on criminal justice reform, other than "studying" it. Someone who craves consensus, but too rarely gets it. And, of course, a guy who really really loves Amtrak.
Don't get me wrong-- I'm a fan of passenger rail, and I'm for pretty much anything that Pete Buttigieg promotes. The New York Times reports that the infrastructure bill currently in play includes $66 billion for Amtrak, dedicated to backlogged maintenance, new routes, and new equipment. Here in Minnesota, for example, there is the chance that we will get a rail route from St. Paul to Duluth and a second train daily between St. Paul and Chicago.
There are real advantages to train travel, and as airplanes become less appealing each year--what is it now, fistfights?-- sitting on a train doing work seems pretty appealing.