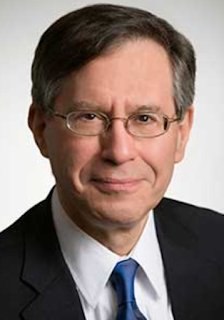 The other teachers I have profiled here would probably remember me, but I am confident that Paul Gewirtz, who taught me Constitutional Law at Yale, would not. He has had thousands of students in his classes, and nearly all of us remember it well.
He was a dedicated teacher, one who cared deeply about his subject and was good at explaining it (it is surprising how often one of those things does not go with the other). For a while, he co-taught with his political opposite, Robert Bork, which reportedly made for a phenomenal class. Many of my classmates, of course, saw themselves as future Con Law profs themselves, so there was always a lively debate on key topics, and he managed it well. (For the record, I didn't even see myself as a future Crim Law prof at that point).
That period at the end of the 80's and into the 90's was a tempestuous time in the life of the Constitution, too, so we were living through the cases and history that students study now. I was lucky to have such a skilled guide.
# posted by Mark Osler @ 1:00 AM