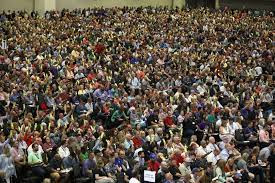 Though it is a relatively large denomination, most of America's Protestants are not a part of the Southern Baptist Convention and its churches. Nevertheless, journalists often treat the SBC as if it is representative of the faith as a whole, lavishing unwarranted attention on it and seeking out its leaders (like Jerry Falwell and Jerry Falwell, Jr.) and key figures to comment on nearly anything involving religion or culture. That laziness has led to a skewed view of Christianity by many people outside of the faith. That has been true since conservatives won a battle with moderates at the end of the 20th century.
Now, the SBC-- which has been losing members for a decade-- is seeing a battle between conservatives and ultra-conservatives for control of the denomination. The ultra-conservatives, who don't seem to really grasp what Critical Race Theory is, are obsessed with CRT, spurred on by Fox News).
The SBC will probably fracture again, with control in the hands of the ultra-conservatives (though the conservatives won most of the battles at the recent annual meeting of the SBC).
Should we care?
No. They get too much attention already. Let them bicker and fight and prod one another on to greater irrelevance.