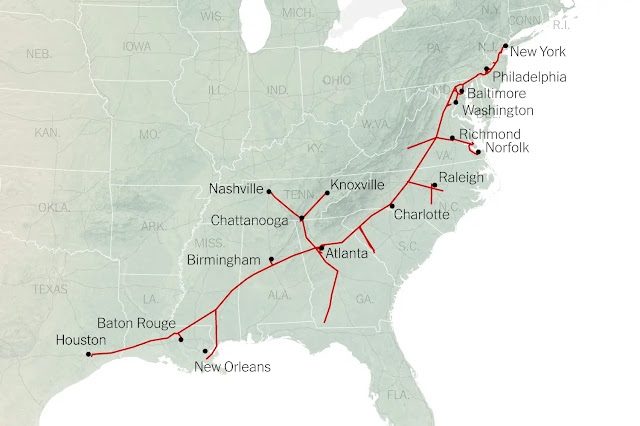 The price of gas has been going up-- and it is going to go up some more, at least in the east. That's because of a hacking attack on the Colonial pipeline, a crucial fuel artery that spans from Houston to New York.
According to the New York Times, the hack was committed by DarkSide, a shadowy Eastern European outfit that hit the pipeline with a ransomware attack (where money is demanded to release the malware they have loaded onto a system). As of yesterday, the pipeline was out of commission for a fourth consecutive day even though the hack was directed at the back office operations of the pipeline rather than its control systems.
In the past, if a foreign adversary wanted to take down a pipeline, they had to use a bomb or other type of a direct attack-- and of course, that would be seen as an act of war. One of the most subtle effects of the online shift in our world is that the same outcome can be achieved silently via the internet.  Our huge spending on warplanes, missiles, naval ships, and all the rest may not be especially relevant anymore-- and this new playing field will negate the advantage in all of that which the US has enjoyed for decades.
Can we adjust? So far, it looks like we are behind the ball. Having built a political and economic system that ensures that traditional military machinery will continue to be purchased at great cost, it may be hard for our aim to shift towards the more present danger.
# posted by Mark Osler @ 1:00 AM

Comments:
Gas lines in Richmond and Asheville, NC according to friends in both cities. Reminds me of my childhood in the 70's. What's next? disco music?

Not much gasoline to be found in Durham today.