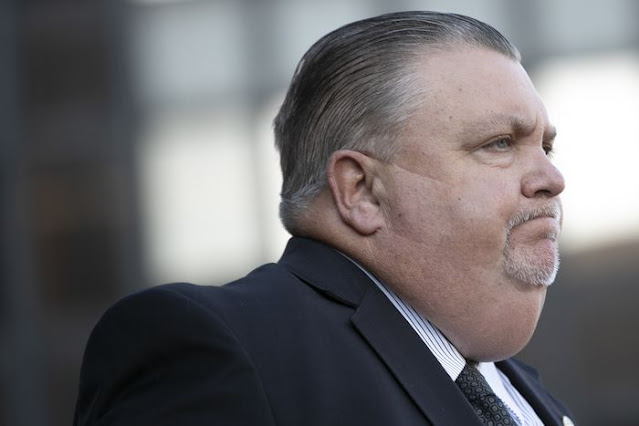 Though most people did not follow it, there was a huge election in Philadelphia on Tuesday, as reformer DA Larry Krasner was up for re-election in the Democratic primary (which, given a 7-1 ration between Dems and Republicans in the city, essentially determines the general election, as well).
He handily defeated a challenger, Carlos Vega, who was a former prosecutor in Krasner's office-- a prosecutor that Krasner fired when he took office. Vega was heavily supported by the police union (the picture above is of the union's head, John McNesby).
Krasner was targeted by the police union and others because he is a real-deal progressive prosecutor. He had cut the jail population significantly, in part by declining to prosecute several types of low-level crimes. Vega and the police union blamed Krasner for an increase in shootings, but Krasner noted that similar increases happened in jurisdictions with traditional prosecutors who had made no changes.
I do get the sense that the knee-jerk "tough on crime" rhetoric that prevailed nearly everywhere in these kinds of elections has lost its punch in cities with relatively progressive populations.
In the long term, I expect that current trends will continue, and crime will go up or down pretty much across the board, regardless of prosecution or policing styles. What is different, and valuable, is that progressive policing and prosecuting reduces the collateral social costs (and the cost in taxpayer dollars) of traditional law enforcement. It appears that may be enough for citizens in places like Philly.
# posted by Mark Osler @ 1:00 AM

Comments:
I gotta say, the result in Philly surprised me a bit. I figured Krasner would still win, but I expected Vega to put up bigger numbers given how bad the murder rate is, how horrible the opioid crisis is, and how powerful the FOP is in city politics. Maybe the voters saw through the smoke and mirrors (which is also surprising given the community backlash on display in the documentary "Philly D.A.").

Crime is increasing everywhere, but I think there's a difference between Philadelphia and some other cities like New York and Los Angeles and D.C.. Homicides are up (by a lot) in those three cities, but those numbers still aren't close to where they were in the late '80s and early '90s, and all three cities had smaller populations then. Philly, on the other hand, had its second-most murderous year on record last year, is about as populous as it was in 1990 when it set its murder record, and is on pace to have its most murderous ever in 2021.

I like a lot of what Krasner's doing, and I don't think his policies are the cause of at least a lot of Philly's crime increase (hello, pandemic), and I'm glad to see the voters are so far buying what he's selling. But I also wonder how long that community support will hold if the murder rate stays this high.