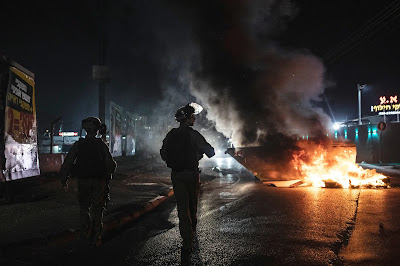 According to the New York Times, violence in Israel and Gaza has escalated yet again. Rockets are being fired into Israel from Gaza, while Israeli planes and artillery shoot into Gaza. It is the worst violence there in at least seven years. Any mythology that the Trump Administration "fixed" the problems there have been exploded.
About 20 percent of the population in Israel (outside of Gaza and the West Bank) are Arab. Jewish Israelis are targeting them for violence, and vice-versa.
The problem, of course, is that the underlying problems and needs there have never really been addressed in a productive way that leads to lasting solutions. Of course, we Americans probably shouldn't be lecturing anyone about that right now, as our own failures to address underlying issues rooted in race have burst to the surface lately.
The rhythm of it all is ancient and eternal: One side hurts or kills people on the other, who respond, and the cycle continues. And it has for far too long, in far too many places.
Last summer was marked by turmoil here. It may be that our hoped-for summer of calm and re-opening, even if realized, may not be shared by those across the oceans.
# posted by Mark Osler @ 1:00 AM