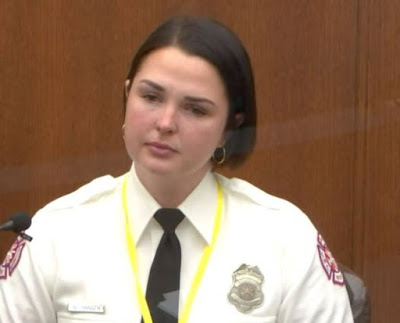 The world's eyes are on Minneapolis right now as the trial of Derek Chauvin proceeds. As you might imagine, I've been talking about it some: to the New York Times, ABC News, GMA, the London Times, WBZ in Boston, and others. Today, I'll be with Al-Jazeera in the morning and ABC News in the afternoon (on their livestream).
If you want to follow the trial online, one great source is the Minneapolis Star Tribune.
So, what am I seeing? Here are some highlights:
-- The openings weren't surprising, except perhaps for the defense's brevity (I knew they would not go long, but thought they would take more than 20 minutes). The government did one thing that seemed particularly effective. When they showed the video (which of course they did), they left the sound in instead of muting it and talking over the video. The sounds of people calling out for Chauvin to stop is a big part of what makes the video compelling.
-- So far, the most important testimony is likely that of Genevieve Hanson, a Minneapolis firefighter (shown here).
-- Charles McMillan, who testified yesterday, was also effective, though his testimony did not go directly to any element of the crime. He struck me as more of a sentencing witness.
-- The prosecution has done one thing that I think is really wrong. They called a nine-year-old girl to the stand to testify about what she saw. That's immoral-- the testimony did not add anything to what others said in terms of facts, and re-traumatizing a child is something that should be done only if it is essential (and it wasn't in this case). Prosecutors view their work as protecting children from trauma-- that should carry over into the choices they make at trial.
# posted by Mark Osler @ 1:00 AM

Comments:
Mark - not disagreeing with your assessment regarding the state calling the child. But (and I think Mary Moriarty wrote this on her Twitter feed), isn't committing a crime in a child's presence a basis for an upward departure? Could that have been a reason for calling the child?

Having said that, an adult testifying that a child was present seems like it would check the same box.

Okay, I don't know why my name didn't pop up. I made the 11:49 comment. I must've messed something up when I posted. My mistake.

I am not watching as the daily recap is enough to turn my stomach. I have never seen the video through and through only snippets.

What is evident to me is that people were pleaing for the police to stop but it also sounds like they were scared of the police. One of the comments from yesterday left me with that impression. It might jave been the child that left me with that impression. I am digusted at the thought that officer Chauvin will probably not receive the sentence that he deserves after so callously taking a life.

Derek Chauvin, a Minneapolis police officer went on trial this week. He has been charged with murdering George Floyd. His trial has had national attention because we have all seen videos of the tragic killing for ourselves as it happened. The video lasted nine minutes and twenty nine seconds. The audio reveals the anguish of those who witnessed this ordeal but were unable to stop the killing of George Floyd. George Floyd didn’t aggressively fight back when he was cuffed and placed on the ground. The bystanders shouted but didn’t physically intercede to stop the killing nor give George aid. The trial has brought out how much they wanted to. They were good people, but they were Black people.These were Black citizens watching what power those in authority had over their lives and deaths. These were kind and earnest neighbors whose instincts were to help yet aware of the risk of intervening. Ingrained in their gut was their history of oppression and suppression by those in authority. We continue to give this abusive power to those who we have entrusted to protect us.
Whatever happens in the trial is out of our hands, but many of us will have had a chance to see for ourselves the need for overdue changes in our delivery of security and justice. For 9 minutes and 29 seconds we saw the results when equal and fair justice for all is absent. Witnesses came forward in court confirming this. Justice for all is a worthy goal and will continue to be in our hands and especially in our hands when we vote.