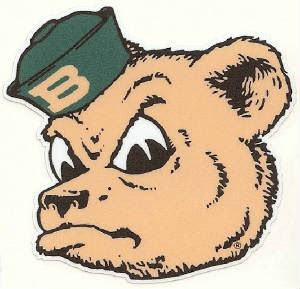 Why is Sailor Bear so grumpy? It has to be because legendary Baylor women's basketball coach Kim Mulkey is leaving Baylor for LSU after 21 years.
Mulkey and I got to Baylor at the same time, in 2000. It was the start of a grim decade for Baylor sports, with the lone exception of Mulkey's squad. She built a dynamite program that was always interesting.
I was a season ticket holder for the Lady Bears (as well as the, uh, Men Bears), and it was a fantastic show.
There is a lot of speculation on why she made the move, but I suspect there were both pull and push factors. Pull factors towards LSU would include the fact that she is a native of the state of Louisiana, and her son Kramer had a strong career there as a baseball player. Of course, I'm sure they showed her a lot of love, too, as they should have in trying to right an athletic department that has had some significant bumps lately.
The push factors-- reasons to be away from Baylor rather that towards LSU-- are harder to discern. But I have some pretty good ideas why someone having a decent run of things might want to leave the joint.
Baylor will probably attract a good replacement... but it is hard to replace a legend. And the first few years, especially if Mulkey's recruits follow her or transfer elsewhere, are going to be rough.
# posted by Mark Osler @ 1:00 AM

Comments:
I can't speak to the push factor, but the pull factor I feel sure is very strong. When I interviewed her back in 2012, after her second national championship, she expressed such love and longing for her home state of Louisiana.