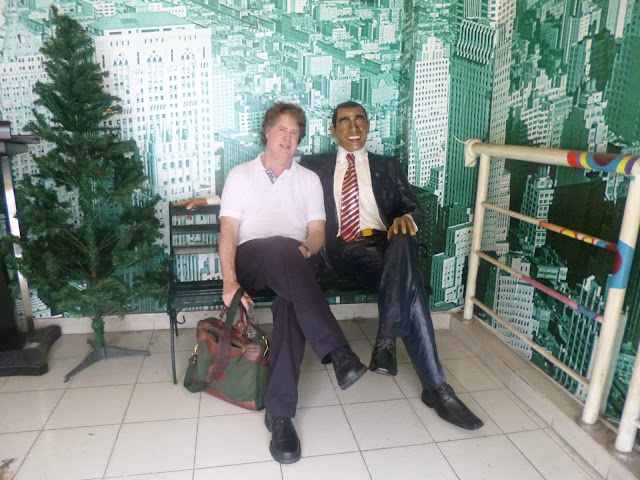 [If you are wondering, the picture above was taken outside of a restaurant in Guangzhou, China, in 2015. It's not a great likeness, but I appreciated the gesture. One man walked by and said "Your President! From Hawaii!" Which I suppose is accurate]
I've begun reading the Obama memoir, "A Promised Land," and it is excellent. Unlike some public figures, Obama is a gifted writer, and has a deft hand with storytelling. I had just finished Bob Woodward's book about Donald Trump, "Rage," before I started Obama's and the contrast between the two men is, well, you know... yuge.
A striking aspect of the memoir is Obama's honesty in describing his rough patches. He was kind of a mess in high school, for example, and into college. But after he transferred to Columbia (after two years at Occidental), he settled into a nearly solitary life of reading and imagining. That seems to be the platform from which he launched. There are things he doesn't adequately address, of course-- for example, he explains not seeking a clerkship after being editor-in-chief of the Harvard Law Review by dismissing it as not being interesting to him. Really?
If you have read Michelle Obama's excellent memoir, "Becoming," her husband's memoir is a good complement. They don't tell the same stories, though they obviously intersect.
Though I spent several years criticizing Obama (here and here and here and here and here and in a rant at the WH itself) for not acting quickly enough or thoroughly enough on clemency, I deeply admire him. It's wonderful to get a fuller picture of his presidency in whole.