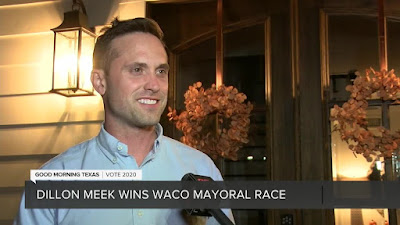 I'm devoting Wednesdays on the blog to profiling some of my former students, alternating between Baylor and St. Thomas. It's been pretty fascinating to catch up with what they are doing out in the world!

Dillon Meek graduated just as I was leaving Baylor in 2010, putting him in with a group of some of the more fascinating students I encountered there (including Joy Tull and Michelle Tuegel, who have already been profiled).

After graduating, Dillon stayed in Waco, working for a local law firm and then transitioning to a general counsel job with a local company. In 2015, he ran for City Council and won. One of his issues while he was on the council was addressing the problems with payday lending companies, which were a real problem in Waco when I was there-- they charged outrageous interest rates and trapped people in debt.

In 2020, he was elected the Mayor of Waco. When I moved to Waco, one of my colleagues, Mike Morrison, was the mayor, so I got a sense of what was involved. It's a tricky job, with shifting coalitions always at work and a need to balance divergent interests. Dillon certainly seems to have the skill set for it, and I'm happy to see him succeeding!