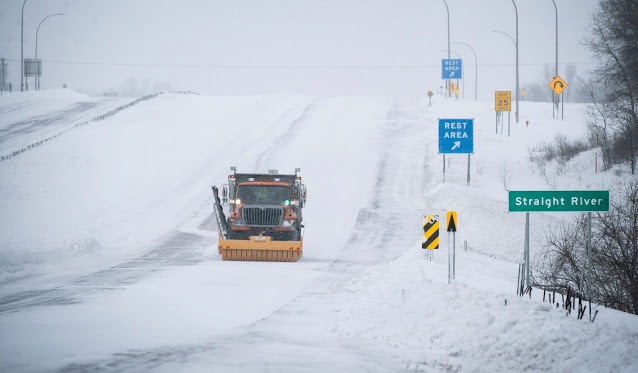 A great story in the New York Times reports on the new names being given to snowplows in Minnesota. Among the winning names in a contest to determine the new monikers:

F. Salt Fitzgerald
Darth Blader
Snowbi Wan Kenobi
Plowy McPlowface
Ope- Just Gonna Plow Right Past Ya
Truck Formerly Known as Plow
Duck Duck Orange Truck
Those last three are just straight up inside jokes. "Ope" is something Minnesotans say when we bump into someone. I don't know why. But I do it now. "Truck Formerly Known as Plow" is a Prince reference. And Duck Duck Orange Duck... hoo boy. For some reason, people here don't act like normal people and play "Duck Duck Goose." Instead, and I'm not making this up, they play "Duck Duck Grey Duck."
Anyways, haiku about all this mess, snowplows, Minnesota, or whatever the hell you want. I'm just going to follow Snowbi Wan Kenobi all the way home.
But I will go first with this haiku:
I wake to the snow
Listening for the sound, hark!
The plow on my block.
Now it is your turn! Just use the 5/7/5 syllable pattern and have some fun!
# posted by Mark Osler @ 1:00 AM

Comments:
Plowy McPlowFace
I see you racing past me
Sparks fly! Salt showers!

Texas has a plow,
One for all the state to share.
So goes the rumor.