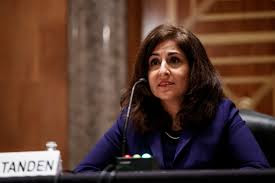 The first real confirmation problem for president Biden is, predictably, Neera Tanden. Tanden is Biden's nominee for head of the Office of Management and Budget, a quietly powerful role within the federal government. Though the claptrap is that she is in trouble-- probably doomed-- is because of "mean tweets," but it probably goes deeper than that.

In short, Tanden seems to have made some enemies in a long career in politics. She graduated six years after I did from Yale Law, and just three years after that she was the Deputy Campaign Manager for Hillary Clinton's successful run for the Senate. Her career has been intertwined with the Clintons, and she was a fierce defender of Hillary Clinton against both Bernie Sanders and Donald Trump when Clinton ran for president.

Tanden helped found and later ran the Center for American Progress, a progressive think-tank that has been home to many Clinton and Obama administration expatriates.

Yes, she compared Ted Cruz to a vampire and Mitch McConnell to Lord Voldemort, but that is pretty tame compared to what we saw come to the surface over the last few months.

Her primary area of expertise is health care policy and funding, which does directly relate to the work of the OMB. But... Democratic Senator Joe Manchin of West Virginia has announced that he will vote against her confirmation because he finds her "overly partisan." Unless a Republican vote can be found, that sinks her in an evenly-divided Senate.

Given that many of her now-controversial statements were on Twitter, I continue to be amazed at the power of a social media platform whose distinctive quality is a limitation (on the number of characters in a tweet).

In completely unrelated news, I had a piece in yesterday's Waco Trib about the electrical grid issue there-- you can read it here.