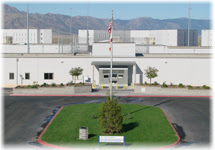 On Thursday, I traveled to a remote and starkly beautiful part of California, on the lee side of the Sierra Nevada. To get there, you drive north from Reno into California and a last vestige of the unfenced West. Dry mountains rise up to the left, and there are few signs of people other than the rare truck passing in the other direction on US 395, a two-lane road that winds up to Susanville and beyond. After about an hour, as I approached my destination, I saw a storm rising and gliding along the mountain peaks, pushing before it a whirling dust storm that swept down into the valley and seemed to be scouring the ground in search of something.

Herlong is a town that lives off two federal institutions: an Army depot, and a federal prison. I was there to visit the prison. As I parked, I thought about how my travels to prisons often take me to these hidden corners that otherwise I never would have found, and about how different they were from the homes of many of the people imprisoned there. It would be like being whisked out of Baltimore and set down on Tatooine.

I'm on a tour of sorts, going to prisons to talk about clemency in the federal system. I've given variations of that talk before several times: at the White House (more than once), at St. Thomas, at Harvard, at Yale, at Stanford, and many other places. But this is  what I should have done first. This is where clemency matters. When I prepared, I used my notes from a talk at Harvard and took out the things you need to explain to a 25-year-old Harvard student but not to a man whose has been incarcerated for those same 25 years. It did not matter that this talk was given in the middle of a cell block. Truth is truth.

The staff at the prison were gracious and helpful. I gave two talks, to about 150 men overall. There was no introduction. I began by explaining who I was (which can take a while, frankly). Part of that story, of course, is that I was a federal prosecutor, and for five years I sought the incarceration of men like them. But I also talked about what I learned from that, and what I do now. The heart of the lecture is about what clemency is and is not; essentially a very simple thing that has been encased in a very complex process.

I have learned to allow a lot of time for questions. Like any other human interaction, listening is more important than talking most of the time. In this session, there were three people who asked questions that have stuck with me and are still rolling around in my head.

A man rose and introduced himself. His question was simple: "What can we do so that our families will forgive us?"

It takes great hubris, I guess, to even try to answer that question. I'm not sure how well I answered, but I did my best. I said that one thing that helps is to become forgiving ourselves, and that humility is the key to almost anything worth accomplishing. I told a few stories of forgiveness heroes, on both sides, and how they got there. But it was the question that was more important than my answer.

Another man told a story. In August of 2016, I called the prison he was in to tell his friend Richard Winrow that Richard was receiving clemency (you can read a good BBC report on the Winrow case here). I remember the moment clearly, but he told me what I didn't know: what happened on the other end. Instantly, people knew what the call was about, that the most powerful person on Earth, Barack Obama, had decided to free a man who had been in prison on a drug charge since the 1980's. There was a wave of joy there that echoed my own in my little office in Minneapolis. It was a moment as memorable to this man as it was to me, and he wasn't the one receiving clemency. Like the others there, though, he was one receiving hope. And the urgency of my mission is propelled by that hope.

In response to another question, the last one, I talked about another call I made that same day, to yet another man who was receiving freedom after decades in prison on a life without parole sentence for a drug crime. I called the prison, and told him the good news. There was a silence, I told the audience, and then my client said "God is good."

And, before I could continue the story, the roomful of men in khaki said in unison "All the time." And that hung in the air like the dust storm in the valley.

That was a moment.

Jesus told us to visit those in prison. So far, on this project, I am finding it is probably more for me than for them.

Comments:
I appreciate you, Mark.