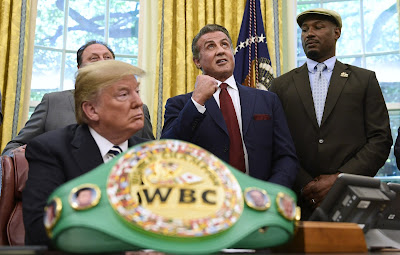 On this weekend's On The Media from NPR, I talked with Bob Garfield about clemency (you can listen to it here). Because I was open to the Trump administration actually accomplishing something with clemency, I've gotten some blow-back from progressives, similar to what some of my friends (and people like Van Jones) have encountered after they came out in support of the First Step Act, which improves prison conditions and re-entry with small, practical steps like ensuring that those leaving prison have an ID.

It's disappointing that anyone wants a good thing to fail simply because they don't like the President-- and it seems clear that for some folks that is what it comes down to.

In 2010, there was a political development that really bothered me. Before winning the House and gaining in the Senate in the mid-term elections, the Republicans declared that their top goal was to basically not get anything done-- to deny President Obama any achievements. Here is how Politico described it in an article titled "The GOP's No-Compromise Pledge":

Here’s John Boehner, the likely speaker if Republicans take the House, offering his plans for Obama’s agenda: “We're going to do everything — and I mean everything we can do — to kill it, stop it, slow it down, whatever we can.”

Senate Minority Leader Mitch McConnell summed up his plan to National Journal: “The single most important thing we want to achieve is for President Obama to be a one-term president.”

Why did that bug me? Because it's the worst kind of governance--acting so that someone else loses, rather than in the best interests of the country on any one decision. And, of course, they fulfilled that goal pretty well.

Now I am hearing the same thing coming the other way, and it bugs me just as much. For some politicians (and a lot of citizens), the most important thing right now is to stop President Trump from achieving anything-- and especially anything that might be popular.

If you are against divisiveness-- and everyone claims to be-- then there is an imperative to look for common ground and move forward where that exists.

That's what I am going to try to do. I hope others can see the point of doing that, especially when the lives of those unjustly serving harsh sentences are at stake.

Comments:
Thank you for this piece! I sometimes wonder if one of the roots of this dysfunction is our national obsession with sports. You have to win at all costs. In truth, with all the existential threats that surround us, we need to begin to cooperate to simply survive.