Russian Jews, newly
arrived, put their heads down in
the cereal aisle.

We take for granted
what U.S. stores have. It’s more
than they can take in.


Of course, for those of us Calvin fans, it was hard not to love Megan Willome's too: 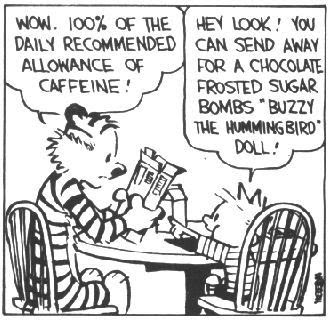 Comments:
I like that the prompt inspired both silly and serious haiku.

True Story: Quisp and Quake were test marketed in the Pacific Northwest where I spent a lot of time in the mid 60's, but not available in Ohio where we actually lived.

Also True Story: When I lived in Beaumont, TX, the Jewish congregation there sponsored Jewish families emigrating from the former USSR. The rabbi told me the story about the first family they sponsored becoming overwhelmed in the cereal aisle at Albertson's. He was kind of at a loss in knowing how to help them, he said, so he guided them out of the store. Subsequent families were shown photos of supermarkets to prepare them in advance.