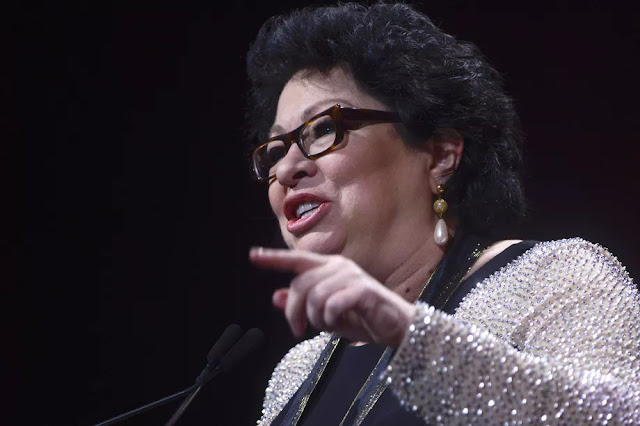 Two justices, Breyer and Sotomayor, read dissenting opinions from the bench (which is relatively unusual). Sotomayor's was a masterpiece.

It began this way:

"The United States of America is a Nation built upon the promise of religious liberty. Our Founders honored that core promise by embedding the principle of religious neutrality in the First Amendment. The Court’s decision today fails to safeguard that fundamental principle. It leaves undisturbed a policy first advertised openly and unequivocally as a “total and complete shutdown of Muslims entering the United States” because the policy now masquerades behind a façade of national-security concerns. But this repackaging does little to cleanse Presidential Proclamation No. 9645 of the appearance of discrimination that the President’s words have created. Based on the evidence in the record, a reasonable observer would conclude that the Proclamation was motivated by anti-Muslim animus. That alone suffices to show that plaintiffs are likely to succeed on the merits of their Establishment Clause claim. The majority holds otherwise by ignoring the facts, misconstruing our legal precedent, and turning a blind eye to the pain and suffering the Proclamation inflicts upon countless families and individuals, many of whom are United States citizens."

But the remarkable part, the section that made the lawyer in me sit in awe, was this part, which refers to the recent case (Masterpiece Cakeshop) in which the Supreme Court upheld a law that allowed a baker to refuse to serve gay customers:

“Unlike in Masterpiece, where the majority consid­ered the state commissioners’ statements about religion to be persuasive evidence of unconstitutional government, the majority here completely sets aside the President’s charged statements about Muslims as irrelevant,” Sotomayor wote. “That holding erodes the foundational principles of religious tolerance that the Court elsewhere has so emphatically protected, and it tells members of minority religions in our country ‘that they are outsiders, not full members of the political community.’”

Comments:
Her dissent is beautiful and so true. Yesterday was a truly sad day for our nation.

An amazing piece of writing to be sure, from beginning to end.

I found the last paragraph interesting:

“Our Constitution demands, and our country deserves, a Judiciary willing to hold the coordinate branches to ac­ count when they defy our most sacred legal commitments. Because the Court’s decision today has failed in that respect, with profound regret, I dissent.”

Darn right Justice Sotomayor. And I’m glad she omitted the word “respectfully” Before “dissent.” She didn’t mix words through the entire dissent, and she made her position clear right through the last sentence.

I was moved when I heard the entire dissent as read by the Justice. Clearly this was a repeat of the atrocious decision of the 1944 court in the Japanese-American internment case, and it will be revisited and overturned at some point in the future.

The U.S. has lost any standing to complain about the ill-treatment of Christians in Muslim countries, for they can call us hypocrites.

P.S. Formerly posting here as A Waco Friend. Change due to change in system software for this site's provider.

I never realized until seeing the opposite treatment of government officials' public statements that the justices had so much discretion (if that's the right use of that term). It seems as though there would be some kind of legal rule directing them to consider, or to ignore, statements made such as Trump's tweets that are outside the specific case at hand; I wouldn't have thought that would be left up to interpretation. Was this unusual?

It's scary, seeing in such unambiguous fashion how much their "conservative" or "liberal" bent matters.