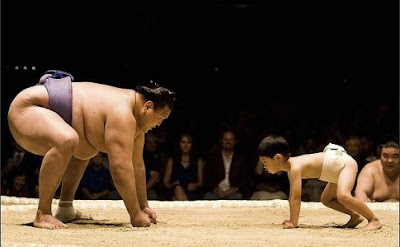 I am naturally inclined against unfair fights; most of us are.  There is one playing out now, though, that I am kinda ok with.

When I was a prosecutor, there was this thing that happened a few times. A defendant would raise money and hire a private attorney, dumping their federal defender. This was almost always a mistake, since (at least in federal court in Detroit) the federal defenders were about the best criminal attorneys you could get for a federal case because they knew the judges, knew the law, knew the sentencing guidelines, and fought very hard for their clients.

Sometimes, the new attorney was from a different sphere-- they might hire a guy that the defendant's cousin had used in a real estate dispute, for example. The new attorney would come in and bluster and bluff, but knew nothing about the world he was traveling in. I remember one guy came to my office and insisted that his defendant should get probation. I asked him how he thought we could get there under the sentencing guidelines. He flew into a rage and said something like "you idiot kid-- they are GUIDELINES! You don't have to follow them!" I nodded and thanked him and sent him on his way without further discussion. The guidelines, at that time, were mandatory.

Donald Trump hired his real estate attorney. The guy made a show of handing out cigars and declaring victory last week. Meanwhile, no one heard much from Robert Mueller... other than that he had hired Michael Dreeben, probably the most respected criminal lawyer in the country, especially at the appellate level.   And that was after stocking his staff with lawyers deeply knowledgeable about the way criminal law works at the highest levels.

Maybe, sometimes, I am ok with an unfair fight, so long as the weak party got there through hubris.