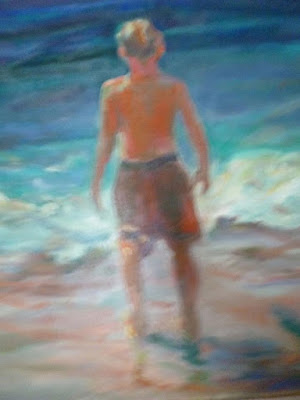 My dad painted the piece pictured at the right. When I see it at my parents house, it reminds me of a few months long ago.

In the summer of 1988, I was lonely and alone. Few people suspected that, I suppose; at the time I was a Yale Law student with a great internship living in the teeming city of Chicago, which comes thrillingly to life in the summer. I was one of the young people striding down Michigan Avenue to work in the morning or wandering through Lincoln Park on a Saturday, but it was a strangely solitary time. It was also, in retrospect, one of the most positive and important moments in my life.

I was working at the U.S. Attorney's Office as a summer intern, and it was a fascinating job that was the very beginning of what has become my life's work. All that has come after-- pursuing Dan Freed to let me into his sentencing class, my own work as an Assistant US Attorney, my choice to teach criminal law, and the advocacy that has come with it-- has been a walk that began with the steps I took that summer. Every day was entrancing, and I stayed at work as long as I could, doing whatever was possible to dig into cases. Eventually, everyone left, and I did too, out into the warm dusk and the crowds on the city sidewalks going off to dinner or a show.

There were other interns, of course, but they seemed to have their own lives that they returned to at the end of the day. I never asked any of them to go to a ball game or dinner. I probably could not have afforded it anyways; I had a meager salary that was funded by other Yale Law students, a portion of what they made working for law firms (and something for which I have always been grateful to those other law students). At the end of the day I would walk out of the federal building and down Michigan Avenue to Abbott Hall, an old Northwestern dorm that had a certain charm but no air conditioning.

That mattered, too. 1988 was a brutally hot summer in Chicago, with several days in a row over 100 degrees. Walking back in my suit (I had two that I alternated) I arrived in my room panting for air. Most days, I would put on my bathing suit and a t-shirt and walk a few blocks over to Oak Street Beach and then literally walk into the lake. Others were doing the same thing, just to cool off, a herd of motionless Brontosauri standing in the water looking at each other, and off to the distance at the big blue lake with my home in Michigan somewhere unseen on the other side.

It did occur to me that I should be social, that perhaps I should eat dinner with another person, sitting down in a chair at a table, rather than gulping it while standing up outside of a hot dog stand. I'm an introvert, though, and those moments are hard for me. I find it almost impossible to walk up to someone I don't know and introduce myself; it just seems intrusive and risky. And Chicago in 1988 was composed of two sets of people: me, and people I did not know.

Sometimes, I would check out the Chicago Reader and find something fun to do, maybe a band playing at a bar. After dark I would walk, sometimes for miles (I didn't have a car or a bus pass) and find the joint, then walk past it on the sidewalk, peering in the windows or through the propped-open door. Then I would walk past it going the other way, getting a different angle. Then I would walk home, never having gotten up the courage to go in, too intimidated by the bouncer and laughing people in groups inside. Back in my hot room, I wondered what I was missing. I wondered, too, how all these people knew each other, how they had met, what the secret might be.

I went to church, a big cathedral full of people. I sat in the back by myself, a regular attender for those weeks. The pews would fill as I studiously pored over the printed liturgy. People would sit in front of and beside me, and then the choir would warm up behind me and march past, two by two. At the passing of the peace I shook hands dutifully. "Peace of Christ," I would say, sincerely. And then I would go home, change, and stand in the lake.

It wouldn't be true to say that I met no one that summer. Late in the game, I got to know a guy living in my dorm, an MIT student who worked at a chocolate factory. After winning a trial, one of the AUSA's and I went on an epic bender that was memorialized with a series of images on my camera that included some kind of energetic karaoke with a group of Korean women at a bar of dubious reputation. But, mostly, I was alone.

In retrospect, that was ok.  I found what I loved in a real and deep way that summer, the thing that would shape my place in this world up to this very moment. Those lonely days and the risk that brought them were a small price for all the remarkable things that have followed from them for me-- a job, a life, a wealth of memories, that is fulfilling and whole and real.

But, there is this: I probably should be kinder to the guy in church, sitting alone, intently studying the printed liturgy because that is what is there to study intently.

Comments:
I really liked this.

Insightful and honest. Brings me back to 1985 when I spent a lot of my spare time staring into the Gulf of Mexico. There is something very cathartic about water.

This is really good, Mark.

I have been in similar situations. Its unsettling.