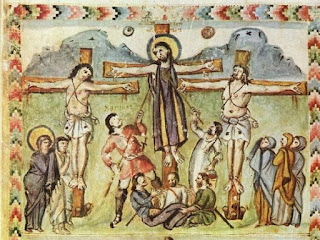 Today I am heading out to Phoenix, Arizona to talk to a conference for those who defend death penalty cases. My subject is religious jurors and how to relate to them. It's not something I have spoken about before specifically, and putting together my materials and powerpoint has been a fascinating exercise.  On Monday, Susan Stabile popped into my office, and I asked her what she thought I should talk about.

"Reconciliation, reformation, and redemption," she said, and she was right. When we execute someone, we lose the ability to heal anything. The idea that it "brings closure" to victims is just not true, according to the people I know who have suffered the loss of a loved one to murder. They don't want to "close out" their feelings-- even the grief-- about the person they loved. Sure, some do want retribution, but that is a different thing.

In the course of my preparations, I created a list of Bible verses relevant to the issue, and was surprised how long it was. Some augured in favor of capital punishment, and some against. I also catalogued the position of various denominations on the issue. One of the more surprising ones, and one of the truest, was from the National Association of Evangelicals:

Evangelical Christians differ in their beliefs about capital punishment, often citing strong biblical and theological reasons either for the just character of the death penalty in extreme cases or for the sacredness of all life, including the lives of those who perpetrate serious crimes and yet have the potential for repentance and reformation. We affirm the conscientious commitment of both streams of Christian ethical thought....

We affirm with the Apostle Paul that governments are called to administer justice to protect citizens and preserve the common good. As citizens of the United States, we are grateful for the degree of public safety most Americans experience and the rules of due process embodied, if imperfectly implemented, in our legal system. American justice appears admirable when compared to that of many other countries where tyranny and corruption reign.

Unfortunately, all human systems are fallible. Nonpartisan studies of the death penalty have identified systemic problems in the United States. These include eyewitness error, coerced confessions, prosecutorial misconduct, racial disparities, incompetent counsel, inadequate instruction to juries, judges who override juries that do not vote for the death penalty, and improper sentencing of those who lack the mental capacity to understand their crime.

In the first decade of the 21st century, 258 wrongfully convicted people have been exonerated due to the introduction of DNA evidence. Twenty of those were serving time on death row, and another 16 had been convicted of a capital crime but not sentenced to death.

As evangelicals, we believe that moral revulsion or distaste for the death penalty is not a sufficient reason to oppose it. But leaders from various parts of the evangelical family have made a biblical and theological case either against the death penalty or against its continued use in a society where biblical standards of justice are difficult to reach. In Mosaic Law, standards of evidence were stringent, requiring a minimum of two eyewitnesses who were willing to stake their own lives on the truthfulness of their testimony and who would initiate the execution by “casting the first stone.” Circumstantial evidence was not permitted. The contemporary American system is unlikely to reach such standards of evidence, and given the utter seriousness of capital crimes, the alarming frequency of post-conviction exonerations leads to calls for radical reform....

Despite differing views on capital punishment, evangelicals are united in calling for reform to our criminal justice system. Such reform should improve public safety, provide restitution to victims, rehabilitate and restore offenders, and eliminate racial and socio-economic inequities in law enforcement, prosecution and sentencing of defendants.

Though it does not embody my own beliefs, that statement strikes me as particularly well-considered and well-written.

Hope you get there. They cancelled all flights to Phoenix yesterday because of the heat.