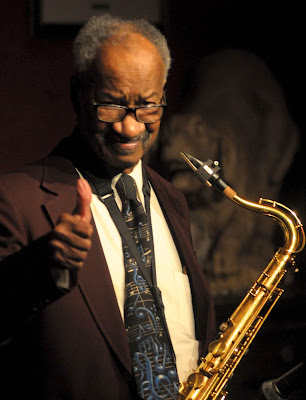 It's no secret that I love the writing my dad has been doing over at his "Upbeat" blog.  The photos are as great as one would expect, but the text is what surprises me. Who knew?

This week he tells a great story; one that is gentle and true. The hero is Willie Jones, the manager of the Dirty Dog Jazz Cafe. Here is part of it:

A week or so ago a pretty full house was settling in to see one of Detroit’s legendary jazz-men, George “Sax” Benson. As showtime was approaching,  George was missing. The piano player didn’t know where he was, the drummer said he was coming on his own and the bass player said oh…oh…. this is unlike George. All eyes turned to Willie. Willie will certainly handle this. Everything will be all right. The lights dimmed which is the signal to us that the musicians are on their way to the bandstand. Happy clinks of knives and forks on porcelain mixed with laughter as the celebrants  waited for the music to start. No one including Willie knew where George was or if he would be there.

I watched in semi-panic as events unfolded. I looked at Willie who looked as calm as our old cat lying in front of the fireplace. He reminded me of those other kids that had really studied before a test. Nonplussed, unshaken, his attitude was calming and reassuring.

Whew, no problem, things will be alright, and they were. It turns out that George got waylaid in traffic and did arrive late. Willie had the piano trio go on until George arrived, and then George played an extra 30 minutes making this a great night for those who came to hear this master of the music. George’s unbridled joy in playing to an appreciative and understanding audience was on full display.


Willie’s lesson for all of us is that old saying “Opportunity seldom rises with blood pressure.”

Comments:
My son gave me some writing tips. He showed me how to structure a story. I now have a lot more fun when I have to write.
Thanks Mark