Things I would change 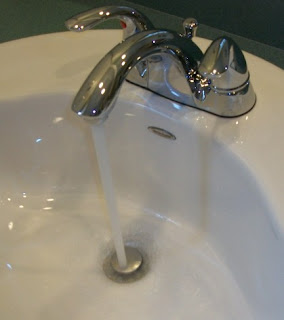 Today's rant is going to be about things that just should be different-- you know, the things around us that make no sense.

1) Why do faucets and (especially) the controls in a shower say which is hot and which is cold? It seems like that is a very basic function of the machine-- letting the user know what they are doing. Yet, the international plumbing syndicate has apparently decreed that no plumbing controls should be marked for this.

2)  Why do television controls have to be so complex? Most people I know have to use at least two different remotes to make their television work. Why isn't there just a button on the remote that turns the television on and connects it to the cable?  I am looking right now at a remote in a friend's house that has buttons for "SEN," "sync menu," "jump" and other mystifying functions. If one had to guess, it would be that "SEN" lets you watch the Senate on C-Span, "sync menu" makes the TV work with everything else, and "jump" makes either the television or the remote leap into the air.

3)  Why does stuff from Costco come in packaging designed to prevent you from getting to the stuff you bought? I had to use heavy-duty scissors, a serrated knife, and a small saw to get to some sunglasses last week. Seriously.

Add your own frustrations in the comments section...

Comments:
Why is it hat restaurants sometimes put condiments on sandwiches that are not listed on the menu? Canada, I'm looking at you. If I get mayo on one more burger I'm gonna invade your country.