Some thoughts on Mr. Trump 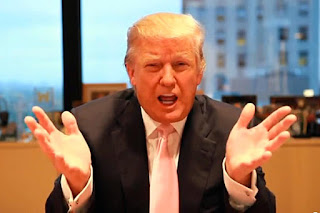 A few days ago, I posted a piece at Huffington Post on the interesting link between Donald Trump and some Christians-- both Evangelicals and others. I hope that you will read the whole thing, but here is part of my argument in that article:

Listening to a Trump speech recently, I was struck by the way that he drew a circle around his audience and talked about "us." Trump cultivated that dynamic every time he starts a sentence with "What the people in this room understand...." He drew a clear in/out line, and defined his followers as being "in." On the outside of the group were the other Republican candidates and their deluded followers, President Obama, and Hillary Clinton.

It shouldn't surprise us that this works. If we are honest with ourselves, we know that sometimes we want the bully to like us-- we want to be in his group of friends, laughing furtively at others. Most of us remember how easily the person a bully taunted sometimes became a follower.

Unfortunately, this tracks the dynamic relied on by too many Christian churches. They attract and keep adherents by describing a hostile world and a Biblical authority that is useful primarily to define others as evil. Liberal churches do this by demonizing fundamentalists, while conservative churches do it by describing the world outside of their walls as the poisoned domain of homosexuals, liberals, and others who they contend will not be found in heaven. Just like Trump, they draw clear in/out lines, and define themselves and their followers as part of the sacred zone within.

That view is true to neither the Bible nor the Constitution. The Bible describes one God over all humankind, and the Constitution begins with "We the people of the United States, in order to form a more perfect union...." The drawing of in/out lines is contrary both to what Christ taught and the nature of democracy. The propensity of Trump and other politicians to not only draw those lines but build them into walls is the sad end-game of the authoritarian streak in our parallel twin tracks of faith and politics. We can and must do better.

2016 is a soul-crushing experience for me on too many levels to enumerate.

My Take on Your Thesis:

The millions of people who are following Trump are not bullies. Generally, they are the downtrodden and forgotten. They are looking for a strong man to protect them from their perceived tormentors. We can argue whether their perception is reality--but the fact is that these folks are genuinely worried about themselves and their families and their futures. They aren't looking to push around the little guy. They are the little guy, and they are looking for protection from people like us, quite frankly.

My other question for you centers on this idea (based on some data) making the rounds that the big division among Evangelicals for and against Trump correlates to the division between churched and unchurched Christians. Any thoughts on that assertion? I am on the fence whether that is just a desperate rationalization on the part of Christian leaders or if the explanation has some merit. Because, of course, there are all these exceptions like Jerry Falwell Jr. and the First Baptist Dallas guy.

WF- I think your thesis (that Trump attracts the downtrodden and forgotten) and mine (that they favor in/out divisions) are compatible, rather than in opposition. Both things can, and in many cases are, true.

On the churched/unchurched dichotomy, I haven't seen data on that-- but I suppose we will!