Political Mayhem Thursday: The Problem with "Fighting for Us." 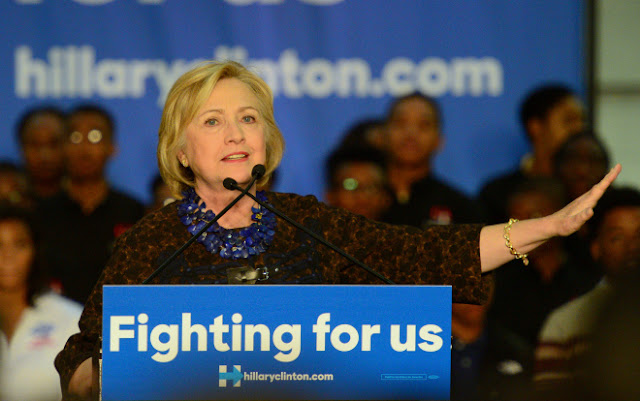 Since she started using it, I have really been bothered by Hillary Clinton's campaign slogan, "Fighting for Us."

The main reason it bothers me is that it somehow manages an internal contradiction in the course of just three words. "Fighting" is oppositional; it means you are fighting against something or someone. "Us," though, is inclusional, wrapping a ribbon around everyone.  Of course, that is assuming she is using "us" to mean everyone-- I am sure that is what she would say. Or perhaps, she would say "us" is the middle class, a category into which nearly everyone in America, from an unemployed janitor to someone paid $600,000 for a speaking fee, would include themselves.

So, is she "fighting," or is she unifying? Given that there is a certain zero-sum quality to Democratic positions (i.e., we help the poor by taxing the rich), it is hard for Clinton to say with credibility that a rising tide lifts all boats-- that is a Republican line.

In the end, I hate this slogan because it does not mean anything at all.

And, this, too:  It runs too close to truth, which is also three words.  An honest banner before Clinton (or Trump, or Rubio, or Cruz) would say this: Fighting for Me.

Comments:
For some reason the $600,000 speech fee figure struck me, as in mind blowing struck me. It is the equivalent of TWELVE years of a cancer research postdoc salary [before taxes] at Columbia University in New York City.

I'm beginning to think that perhaps the best thing that come out of the political disaster is some good tunes. 1968 did feature a lot of great rock & roll. Perhaps that's all we can hope for.

Picking up on your thoughts re: Trump's constituency, I think that every politician is trying to seize the zeitgeist by capitalizing on populist worries. Trump exploits fear; Sanders exploits anxiety (and Clinton is grasping after Sanders' core of voters). We live in times that ought not be seen as perilous or in crisis, but are. How many times did we hear during debates that our country is in crisis, that it is not great, that we as Americans are somehow suffering?

The fact of the matter is, things are going pretty OK in America. There is room for LOTS of improvement, from everything from the social safety net to education to healthcare. But just because something can be improved does not evidence any essential lack. The OECD paints a fairly rosy picture of life in the US. This website is a fun tool that can compare life in several countries. I've chosen the US and Denmark for funsies, but as you can see, Denmark (consistently ranked as one of the highest quality of life countries) just isn't that different than the US.

In short, we have no real reason to be anxious or fearful. Instead, we should be optimistic. We should be glad that we as Americans possess the resources, the ingenuity, and the human capital necessary to address virtually any issue or problem that we want to address. We don't need to make America great again. We do not need a sociopolitical revolution. We simply need to continue the forward march of progress.

But I suppose that doesn't jazz up a campaign, and it is sure to rankle those who fall outside of the statistical mean, those who are hurt by inequities in current policy. "I want something done and done now!" is their cry, and we ought not lose sight of their individualized suffering just because at the marco-level things are pretty decent. They should form the basis for change, but orderly change. Democratic change. Change that comes not at the end of a raised fist or a shouted word but through reasoned debate. It may sting to be told, "let the process work," but allowing fear and anxiety to rule us can have disastrous consequences, as history makes all too clear.