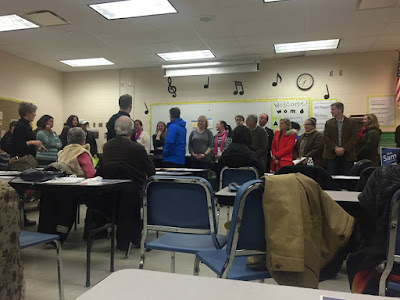 Last night was a great time to enjoy a little democracy! We had our caucuses here in Minnesota, where people in a neighborhood gather to pick their delegates to a convention who then elect delegates to another convention, or something like that.  It felt much more important, somehow. A kid who just turned 18 gave a speech on a resolution. An old lady hooted with joy when it was announced that Hillary Clinton had won the room.  In the end, for some reason, we all clapped.

One of the things we did was sort through candidates for state rep. The candidates (the incumbent, a stay-at-home mom, and a somewhat manic IP lawyer) came through and gave little speeches, and then we voted by standing in one corner or another. It was kind of like a school council election for grown-ups.

I found the whole thing thrilling.

Comments:
Minnesota delivers for Bernie and, finally, a victory for Rubio. Bully for the North Star State.

An Aside: Bernie continues to charm me like no other Democrat since Paul Tsongas (although I felt like I was much more aligned with Tsongas on policy than I ever will be with Bernie).

What would happen if a really sincere person who loves his country more than himself ran for president? Oh. Well, it was a nice idea.

Looks like we are heading to a general election with the opposite qualities (from "really sincere person") found on both sides. Sigh.