A Book You Should Buy 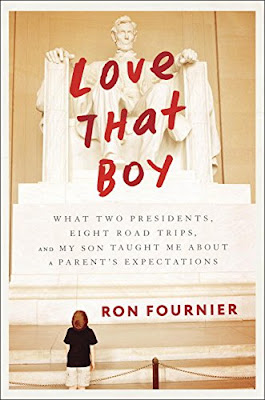 Regular readers of this blog know that Ron and I go way back; when we were 17 we co-edited the school paper and ran near-identical times on the cross-country and track teams.  We took the bus to Iowa City to attend the Iowa Young Writer's Studio, collecting adventures along the way.  We have stayed in touch even as our paths diverged and then converged again, and lately we have even collaborated.  Now, it seems, we are publishing memoirs in the same year.

Though, it might be that his is better. I have read Love That Boy, and was deeply affected by it. It's not a re-telling of Ron's remarkable career as a journalist, but rather focuses on his role as a parent. In particular, it lays out some of the joys and challenges of raising his third child and only son, Tyler, who has Asperger's Syndrome.  I had the pleasure of reading the book a few months ago.

Too often, these stories turn into a celebration of the virtue of the parent and a lament for the troubles he or she faced. There is none of that here, as those who know Ron's writing would well know. He is a rare commentator in that he admits his own mistakes and frailties up front, yet is fearless in confronting the powerful.  The same spirit animates this more personal story arc, in that he describes his stumbles and errors as part of a richer tale that he knows is grander than himself. Bill Clinton and George W. Bush are characters in the book-- important ones-- but not as important as Tyler or the towering figure of Ron's father, a Detroit cop who made sense in a time and place (Detroit in the 1970's) that often lacked those figures. I knew Ron's dad, and he made a strong impression on me: when I thought of a police officer, I thought of him, and when I went into law enforcement it was in my mind that I was going to be working in league with people like Mr. Fournier. Sometimes, that was true.

Ron Fournier could sit around and tell war stories about famous people for days, if he was that kind of person. He's not, though, and it is the human scale of this very human story that makes it important and real and moving. It's not about a famous guy and the people he met. It's about a kid with some issues and a dad with some issues, and that's pretty much the deal with us all when the truth is laid bare.

So, go ahead and buy it.

Comments:
I did not have a chance to comment yesterday. Several years ago I read the article that Ron’s books is based on and I was much moved. A very candid, loving, poignant father-son story … one of the articles you copy and forward to good friends. I trust his book is the same, if not better.