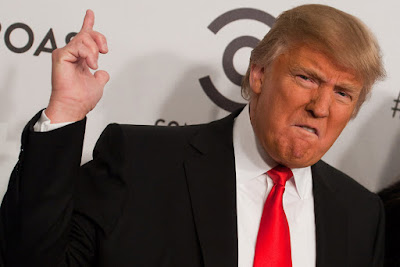 Something very strange has happened in the presidential race, even as an intriguing candidate (John Kasich) entered the race: Pretty much everyone seems obsessed with Donald Trump. This is probably not a good thing for America, but people seem unable to look away.

In the New York Times, Frank Bruni put it well:


If we discuss Trump, as I’ve done in several columns, we reward his bad and transcendently self-serving behavior, no matter how negative our assessments of him or how many larger truths we engage.

If we don’t discuss him, we ignore something real, in a fashion that’s irresponsible.


By something real, I mean the fact that Trump has measurable support, at least for now. In a nationwide ABC News/Washington Post poll of Republicans and Republican-leaning independents that was released Monday, he was in the lead for the party’s presidential nomination, the favorite of 24 percent of respondents. The next closest contenders were Scott Walker (13 percent) and Jeb Bush (12).

I have three general thoughts about what is happening (all of which have been articulated by others in various ways):

1) Yeah, this is terrible for Republicans, because they present a fascinating diversity of candidates, and none of them are being heard. What a campaign craves is media attention, but the air has been sucked out of the room by the Trump phenomena.

2) It's not that great for Democrats, either. If Hillary Clinton is to build support now, she needs to be seen. Trump distracts from her, and she has hurt herself by running a stilted, conservative campaign that seems terrified of allowing the candidate to truly be seen. The Trump effect and Clinton's carefulness have created an opening for Bernie Sanders, the candidate on the Democratic side who has been the most surprising thus far.

3) I'm not so sure that support for Trump will evaporate immediately, as some think. The truth is that his brash anger appeals to a substantial plurality of Republicans-- the Tea Party folks who are mad as hell, don't trust establishment candidates, and didn't like John McCain anyways. The reason that some of the Republican candidates haven't strongly condemned Trump is that they realize this. Going forward, of course, those activists will face the usual disillusionment as the establishment chooses a moderate candidate like Jeb Bush.

4) It will be really depressing to me to watch Hillary Clinton run against Jeb Bush, as both are so carefully managed, handled, and cabined.  Now, Bernie Sanders v. Donald Trump… yowsa! But then the election is over and there would be the prospect of "President Trump."

Comments:
Nauseating megalomania aside, I’ll say let it Trump! Let the ratings soar in all Kardashian style “reality” glory and call them polls. Let the media engorge, it wouldn’t be the first time [and sadly not the last time] idiocy is packaged as "controversy." Let it Trump infinite unfiltered crass and package it "authentic." Let incoherent anger, ignorant chauvinism, misdirected xenophobia and misplaced religious beliefs have a shiny new package; one wrapped in gold no less. Even though The Donald signature gold is in fact brass, brass that needs to be polished every other week by an army of Mexican workers (incidentally I walk by one of Donald’s buildings every morning on my way to work).
Bottom line, the Republican Party has earned and most certainly deserves this Trumpfest and if by some fantastic turn of the electorate The Donald becomes The President, it will certainly be one highly rated political show. Perhaps the do nothing clowns in DC will join the President circus and do something entertaining at least. Meanwhile I'll work on my Spanish, just in case I need to move to Mexico (Canada is too cold).

The more I hear about the Trump the more I am reminded of Mahmoud Ahmadinejad. Remember him? And what the world thought of him. Crazy as a loon.

The media is playing Trump so much no one can remember that two more clowns hopped in the car this past week and a half.

Christine, I don't think the Republican candidates this time around are to be scoffed at-- they have some people with solid experience and disparate views on important issues. This is not Bachmann/Cain/Santorum time, at least among the top 10 (exclusive of Trump).