Sunday Reflection: Death of an Elder 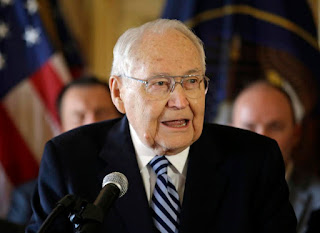 Yesterday, Mormon Leader L. Tom Perry died at age 92.  He wasn't a "former leader," either-- he was an influential member of the Quorum of the Twelve Apostles, which is the governing body of the Church of Latter Day Saints.  As I have discussed here before, I disagree with the Mormons on many issues but deeply respect many of my Mormon friends and students (which comprise interlocking groups), and recognize the influence that faith has in their life.

I find it fascinating-- and admirable-- that Mormons have true elders in such high positions. Not only the Quorum of the Twelve Apostles, but the subordinate Quorum of the Seventy (Christians will understand the meaning of those numbers) have members who are 80 and older.  The only other similar body I can think of is the United States Senate, which I have similarly admired.

Certainly, there arguments against older people holding leadership positions.  The principle argument has been that they are resistant to change.  My own experience does not bear that out, however. I have seen-- close up, and at a distance-- people over 80 embrace and lead groups towards change.

At age 80, my grandfather went water-skiing.  More importantly, he endeavored to build his own computer, and did so.  He also led the computerization of his accounting firm, and continued to be a creative leading force in his community.  It made a deep impression on me.

The Bible shows God choosing people who are very old and very young for important positions and roles.  Should we be so different?

Comments:
I think inquiring minds age into the kind of wisdom and energy that makes them true leaders; elders as in, invaluable role models to admire, be inspired by and learn from, just like your grandfather was or like the octogenarian leaders you mention. But I also think dull minds do not sharpen with age, nor do they gain any benefic wisdom and often times driven young leaders age only into entitled elders.