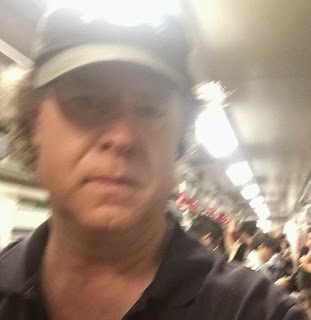 While working at the University of Guangzhou, I found myself a little isolated out on "University Island"-- which is literally an island containing the "Mega-University Center" where ten or so schools are located.  It is mostly tall towers and concrete school buildings.

To get a taste of the rest of the city, I found the nearest stop for the Metro (which turned out to be "Mega-University South) and took the train into town.  The Metro is pretty remarkable-- fast trains and frequent, but remarkably crowded.  I quickly learned how important it was to stand in the right place, and when to move into or out of a train. To get to the center of the city, I had to change trains twice.

Both time I took the subway, I noticed the same thing: I was the only person on the train who wasn't Chinese.  It may have been a fluke, of course; certainly there are Europeans and Africans and Australians and North and South Americans doing business there, but they just weren't taking the train, or at least they weren't taking it at the same time I was. Still, for that short moment I thought "Huh! This is what it is like to be a racial minority."

It was a short moment, though.  Just as quickly, a voice in my head, the voice of reason, said "no, it's not." And that second voice was right. The truth was that I could get out of the subway and pretty easily find a church or a pub where most people looked like me. I could jump on a plane and come home, where I can (unfortunately)  go a day without seeing a minority member.  It was in part because of the majority advantages I have had, too, that I was able to go there at all and see a place on the other side of the world. To say "this is what it is like to be a racial minority is about as true as standing in the shower and imagining that now I know what it is like to be a fish.

But still, there was a bit of truth in that moment.  The vulnerability, for one thing, and the way people looked at me as the person who did not fit in.  The sense that I had to do everything just right-- stand in the right spot, not fumble with my ticket (actually a green disk), so that people wouldn't think that people "like me" are incompetent. Perhaps even the repressed desire to hold myself away from the others on the train, so I wouldn't be stared at.

But that is just a bit. Still, a bit more than I had ever had before...

Comments:
Your second thought was so right. Being an American in any part of the civilized world is tantamount to holding those mythical "letters of transit" and the King's seal.

Glad you are back in the USA. Welcome home.