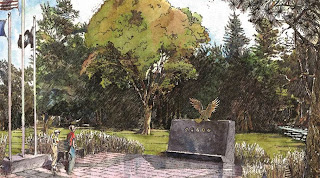 Yesterday I rode my bike down to the park across the street from my church, St. Stephens. My town, Edina, was dedicating a new memorial to those who had died in the nation's wars.  The ceremony was very well done: the politicians kept their speeches short and topical, the band was great, and the right tone (somber) was set. The new monument is sent in a quiet corner under a canopy of trees and close to the banks of Minnehaha Creek.

Edina, in fact, has lost less than 40 men and women in all of the nation's wars.  I was surprised that it wasn't more, but the fact that the population boom here came late in the 20th century probably has something to do with that.  Still, they were remembered, as Boy Scouts stood holding pictures of each one of them as the politicians spoke, and their families sat attentively.

None of them chose the war; they simply chose to serve.

Our last three presidents (Clinton, Bush, and Obama) have involved our soldiers in war, but none of them served on active duty in the military, a sharp break from their predecessors. President Carter, for example, graduated from the Naval Academy and served as a Navy officer. Ronald Reagan joined the Army reserve in 1937, and was called up to active duty in 1942. George H.W. Bush was a genuine war hero, flying 58 missions as a naval aviator. Those three actively avoided protracted wars. Reagan chose not to respond when a Marine barracks was attacked in Beirut in 1983 by a group called "Islamic Jihad," killing 241 American soldiers. While the first President Bush did choose war with Iraq after its invasion of Kuwait, he limited that war to the goal of restoring Kuwait, and declined to pursue "regime change."

War, if it is chosen at all, should be chosen rarely.  The reason for that discernment is written on that freshly carved granite in Edina, in the park by the creek-- the creek where we baptize children in the summer, and skate in the winter, and which ceaselessly, gently, wears rocks into pebbles, smooth as night.

Comments:
George W. Bush served in the military. He was a pilot in the Texas Air National Guard. According to the Wikipedia page on the subject, there's some dispute about whether he pulled strings to avoid the draft, and whether he fulfilled his service commitment. I have no idea. As far as I can tell, he never saw combat, so maybe it doesn't affect your thesis.

Brad, I should have made more clear that I was talking about active duty rather than being in the reserves… at any rate, it sounds like GWB didn't even do much with his reserve service. Of course, Reagan was active duty, but spent that time making recruitment and propaganda movies-- but still, he was on full-time, active duty.