Haiku Friday: Bring it Back!

So, McDonald's has brought back the Hamburglar, my favorite character. In fact, he showed up in my Crim Law final, which I am grading right now…

Of course, they brought him back as a suburban dad who some find a little creepy. In fact, Fortune magazine described him as "half hot suburban dad, half creepy neighborhood peeping Tom." That doesn't sound good. We should just be glad that McDonald's didn't bring back his brother, the much more dangerous ham-murderer: 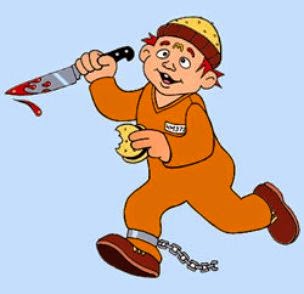 Anyways… let's haiku this week about stuff that companies should bring back.  TV shows, hamburger mascots, entire franchise concepts, whatever!  Here, I will go first:

Hey there, CBC…
Bring Back the Friendly Giant!
The best morning show.

Now it is your turn! I have made it easy again-- no word verification or blocking of anonymous posts.  Just use the 5/7/5 syllable recipe, and have some fun!

Comments:
I want The Clapper
Only, now that I need it,
I cannot find it.

I Dream of Jeannie
Best TV theme song ever!
Plus the great outfits...

I still miss Donald
Trump; blowhard extraordinaire
Oh, wait... he is back!