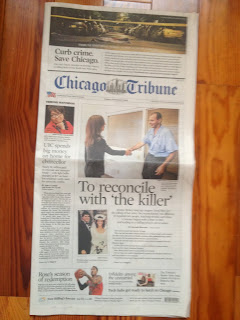 My opposing counsel in the Trial of Jesus is Jeanne Bishop, a Chicago public defender.  Often during our presentations, someone will say "You wouldn't be against the death penalty if it was your family that was killed!"

I let Jeanne handle that question, because she knows.  Her pregnant sister, Nancy, and her brother-in-law, Richard, were murdered.

Now, Jeanne has been meeting with the man who killed her family members.  His name is David Biro. Jeanne was driven to do so by something Randall O'Brien wrote:  "Every Christian has the responsibility to reconcile with the person who has wronged them."

The front-page story in today's Chicago Tribune is about that reconciliation; you can (and should) read it here.

One of the things that baffled me was the idea that Jeanne is somehow being "manipulated" by Biro.  If there is anyone who isn't going to be manipulated by a convict, it is a 23-year veteran public defender.  She has spent more time in jails and discerning the guilty from the innocent than anyone I know-- and I used to be in that business myself.   What she is doing is brave and good, one of the hard tasks (as Randall described it) that faith requires.

Comments:
I read the article. I am generally opposed to the "life without parole" sentence for juvenile offenders. However, from the article, I am not convinced that this killer is ready for anything more than continued incarceration. He seems manipulative, concealing, etc., rather than open and remorseful. I do not believe that true reconciliation is possible until the person who willfully offended is as willfully open, remorseful, and truthful.

I think WF has it about right.

In my opinion, a predicate of reconciliation is mutual recognition of the gravity of the offense and on the part of the actor, an open and honest acknowledgment of responsibility.

Forgiveness, on the other hand, may be an appropriate response by an injured party even in the face of a want of repentance, openly epressed.

Randall O'Brien's view is a more or less orthodox chrisitian position, strains of which are found in non-chrisition cultures, religions and philoophies. ISometimes, however, what an offender needs is a "good, swift kick in the pants," or a "solid round house to the nose," as much to disincentivise recurrent bad behavior as to give the offended a sense of satisfaction that justice has been done.In In such cases, both forgiveness and reconciliation take a back seat to retribution, at least temporariy. "Warm and fuzzy" theories can be indulged thereafter at leisure, after the danger has past.

And then there is the question: who has a right to seek reconciliation or even to forgive beyond the damage done to oneslf. It is as impossible as it is presumptious to "forgive" vicariously the harm caused to others, and "reconciliation" with the actor under circumstances where the offender has "offed" or otherwise silenced a loved one stands a fair chance of defeating justice for the one who no longer able to speak muich less "forgive" or "reconcile" for himself..

It does make it easier for others to stand down from the messy business of administering jsutice when the secondarily offended "forgives" or "reconciles," but where is the justice in that for the one silenced or for society?

Christ often taught things we find hard to understand by our sense of reason.

"Christ often taught thingswe find hard to understand by our snese of reason."

Can't disagree with this, M.O., but that raises the question: "Why would he do that?" Oops, your point exactly.But the question persists.

Now, back to the question you posed to begin this thread. Christ no doubt taught "forgiveness," arguably without qualification. He asks hard questions, and expects us to do hard things. But, since it is impossible to reconcile ith the irreconcilable, here in all of his teaching, or the many glosses of his teaching, is there a command to do the impossible, which is what it means to attempt reconci;liation with one ho has no interest in it means?

As i understand the theology of it, God's attempt to reconcile humanity with the divine is doomed unless humanity responds and reciprocates. Mutuality is the key. That is wanting in the case under review. But, even were it otherwise, one cannot effect reconciliation or even extend forgivelness by proxy.

Hmmm... you properly state what Christ directs, then use your reason to talk yourself out of it.

Why do you need Christ if your reasoning and intellect is superior to his teachings?

I think we are at sixes and sevens. You have missed my point. Mea culpa.