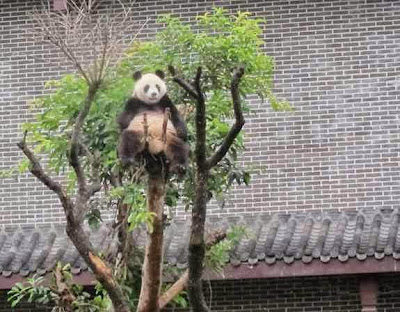 According to Yahoo News (which is apparently taking a brief break from non-stop celebrity tidbits) and "scientists," panda have some small amount of genetic diversity among the 1500 wild animals left in six isolated parts of China.

Speaking of pandas, I occasionally get questions about Grar the Giant Maverick Panda,  who lost the presidential election to the liberal, Argbf.  The news is good!  After making a small fortune doing cheese commercials in India,  Grar returned to Washington to use those same skills as a lobbyist for defense contractors, Chinese toy manufacturers, and Yu Wan Mei (which also has hired IPLawGuy to protect the trade name and distinctive markings of the Yu Wan Mei Device).   Hurray for Grar!

Comments:
Hey, why the quotation marks squeezing the scientists? It’s perfectly fair to note that all that inbreeding cannot be good news, which only goes to show that rigorous kung fu exercise and a strict (albeit monothematic) diet are no match to deviant mating practices.

Can we replace Congress with pandas? I'm willing to give these guys a shot. They couldn't do worse...

Practicing of mating not deviant. It good for species and special mating friend.