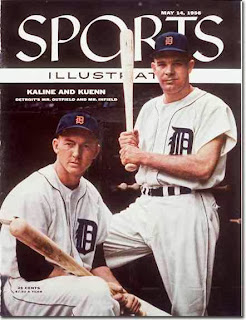 I really struggle to care about baseball once summer is over; it just seems kind of wrong, like seeing Christmas lights in April.

Still, the Tigers are battling it out with the Red Sox for pennant, and I do feel compelled to care at least a little bit.  And anything with Prince Fielder involved is guaranteed to be interesting.

Who are you betting on?

Go Tigers! Detroit can use the boost.

In the late sixties and early '70s, I attended quite a few games in the old Tiger stadium. The kids attending would make a real racket banging seats or stomping on the bleacher seat boards. It was a great place to watch a game, and it was so inexpensive.

Mark, how terribly Tiger Centric of you (albeit, it is your blog). I will offer a Big Papi, rather than a Prince. Both great hitters and great characters … and they both make the game fun and fun to watch. Go beards … go Sox!


To loosely quote somebody (in Bull Durham)... "It is really a simple game. You throw the ball, you catch the ball and you hit the ball. Some times you win, sometimes you lose and sometimes it rains."

That said, it's time for the Tigers to step up to the plate and hit the ball.

First choice: Dodgers-Tigers. I would love to see the team of Ty Cobb take on the team of Jackie Robinson for the first time ever. We could call it the Kirk Gibson Series. Or the Hipster Series.

After that, I am ambivalent, with one strong exception. If it's Cardinals-Red Sox, I couldn't handle the obnoxiousness of the fan bases. They're both awful, and neither of them "deserves" another title.