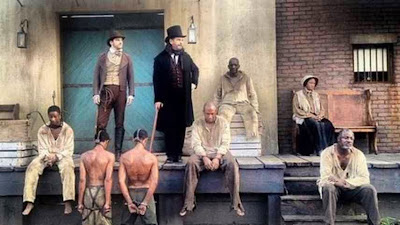 I haven't seen the movie "12 Years a Slave" yet, but hope to soon.   My mentor Joanne Braxton wrote a great piece in Sunday's Daily Press about it (am I the only person who didn't have something in Sunday's paper?).   She saw the movie at Hampton University,  a school not far from William and Mary, but with very different origins.

Here is part of what she had to say:

For the unfamiliar, Hampton University is a historically black university founded for the education of former slaves, virtually under the arms of the Emancipation Oak. More than 150 years old, this tree has been designated one of the 10 great trees of the world by the National Geographic Society, because it is where many formerly enslaved African Americans gathered to receive their first lessons in literacy from Mrs. Mary Peake in 1861. Under its shelter, the thirst for freedom and literacy grew from the dust of yearning into one of the most powerful movements in America.

Twelve Years, a true story of horrific proportions, is not easy to watch, even for someone who has studied and taught the slave narrative as literature. Solomon, a free man, is drugged and betrayed by people he thought were friends, and thrust into a system of pure evil, most frequently represented in the genre of the slave narrative as "hell."

Have any of you out there seen the movie?  How did it affect you?

Comments:
I went to see this movie about a week and a half ago. It is the extraordinary story of a man from Saratoga Springs who was kidnapped in Washington DC and sold into slavery. A story he got to recount when he was later saved and a story I wonder why it took so long to be retold. A story so raw with emotion and so transporting, it still sends a cold shiver down my spine. A story so deep it still makes one reel long after they heard it. A perspective I think everyone should have, a lesson everyone should learn and a history no one should forget.