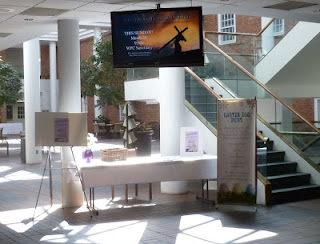 Today, Jeanne Bishop sent me this remarkable reflection to post:

Each Lent when we get ready to do the trial, something extraordinary happens. The Holy Spirit--which has been described as a still, small voice--turns into a loudspeaker, saying, Do this.

Three extraordinary things this past week:

Saturday: I met with 82-year-old Nicholas Biro, father of David Biro. Twenty-three years ago, the night David was arrested for shooting my sister and her husband and baby, Mr. Biro called. His voice sounded as if he had swallowed broken glass; he said how sorry he was for our tragedy, but that it couldn’t have been David who had killed them. It had to be a mistake.

I don’t remember my exact words to him—something about being in litigation soon and not being able to talk. But I remember what I didn’t say: how sorry I was that he would now be going through a tragedy of his own, the prosecution of his firstborn son for murder. I expressed no compassion. I hadn’t spoken to Mr. Biro since.

I called him to apologize for that. He was gracious and kind. We met for coffee, sat by a fireplace and talked. He has driven hundreds of miles every two weeks for the past 22 years to see David in prison. I told Mr. Biro of my change in heart about juvenile life sentences, that I had written to his son and would go to visit him. When we parted, Mr. Biro took both my hands in his and said quietly, “God bless you.” It felt like just that: a blessing.

Sunday: I met David for the first time, at Pontiac prison. That happened because of an apology, too. All these years, I have waited for him to admit he killed Nancy and Richard and say he was sorry. He never did. Then it struck me: I had spoken publicly about forgiving him, but I never told him. I never communicated that forgiveness directly to him.

I wrote him to say I was sorry for that. He wrote back, 15 handwritten pages, doing something I never dreamed he’d do: he confessed to the murders and apologized.

Walking into the prison on a sunny cold Sunday morning in Lent felt just right. Lent means “Spring,” and I could feel the start of something growing.

Thursday: I went to the Illinois Capitol to testify in favor of changing the law about juvenile life without parole, the sentence David is serving. The reform would give juveniles a chance to be resentenced and released some day. I knew that by doing that, I would be publicly taking a position opposite from the one taken by the only remaining members of my nuclear family: my mother and older sister. I knew they would be there in that hearing room, on the opposite side of the aisle. That prospect felt like a rock in the pit of my stomach.

I reached out for help to my saints—Craig A, among them—and they gave it.
The incomparable Susan Stabile wrote me before the hearing. I had asked her to give me a mantra, something to carry with me into that hearing room.

“From the prayer, the Anima Christi: Jesus, with you by my side enough has been given.
(Or, as it is phrased in Phillipians, I can do all things through Christ, who strengthens me)”

That prayer hovered around me all day as I walked through the corridors of the Capitol: Enough has been given.

It flooded my heart as I approached my mom and sister before the hearing started, and we wrapped our arms around one another in a long group hug.

Comments:
there are so many things running through my head and heart right now-- and i'll confess a tear rolls down my cheek as i type-- but they all add up to: WOW.
this is without a doubt one of the most powerful things i've read in quite some time-- for so many reasons.
it is at once both simple and highly complex. both a matter of the mind, yet also fraught with emotion.
knowing myself, i would almost surely have been on the side of the aisle with your mom and older sister, Jeanne. but that would have been because of my own personal, possibly selfish, emotion.
your action/position on this deeply personal matter is inspiring. it's Christ-like. it's amazing, awesome, and it is unrivaled grace.
wow.
this is touching on so many levels, and i'm absolutely certain that i'm not the only person, razorite or otherwise, who finds his or her life, surely our perspective, changed by this.
we've never met, but you're a world-changing woman, i know that much for sure.
as close as a human can get to imitating Christ's ability to forgive, and demonstrating God's Amazing Grace.
thank you for sharing this, Jeanne. thank you for passing it on, Mark.
thank you so, so much for this.

Jeanne … you have a remarkable ability to go places, both literally and spiritually, that I have a hard time imagining. I often find myself responding with incredulity, with utter awe … and like Woody ... my mouth is saying, wow!! And you consistently do this. I trust those can be scary, frightening places for you to go. Nonetheless, you go. Know how awe inspiring your example is for so many … and although we make a good faith effort to hold you in prayer at a safe distance … your courage pulls us along into risky places, to better places, where we too are called to act on and out of our faith.

What wonderful words of love, mercy and forgiveness to return home to - Thank you all. . .

God Bless you Jeanne, your mother, sister and loved ones and the entire Biro family.