Sunday Reflection: Into the mist 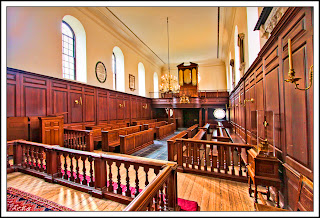 I'm in Williamsburg, getting ready for my sermon tomorrow in the Wren Chapel, pictured above.  It was built in 1732 as an addition to the oldest academic building in America.

Last night, I walked down through my favorite part of William and Mary's campus, the Sunken Gardens just behind the Wren Building.  It was a warm and damp night, and there was a mist rising up from the lawn.

I always loved that mist.  Sometimes I would sit on the steps and just watch it... it would be a still, small moment.  It would be there whether I saw it or not, but I would not see it unless I was willing to create that moment of still and quiet.

And that, my friends, is what I will preach about today:

Thirty-two years ago, I came here for college.  I arrived by myself, walking up the steps of Dupont Hall with a vinyl Sampsonite suitcase in one hand and a manual typewriter in the other.  I was entering a very different world than the one I had left in Michigan.

That world had been shaped by chaos.  My first memory is this:  When I was four years old, there were terrible riots in the city of Detroit, where we lived.  There were of 500 hurt or killed, and 2,000 buildings were destroyed.  Children were told to stay inside, of course, but you know what happens when you tell a four year old what to do.

Once I escaped, I ran towards the end of our block towards Warren Avenue, but when I got there I stopped cold.  The United States Army was occupying the city, and driving down Warren was an armored personnel carrier with solders atop it, guns out.  Terrified, I ran the other way.   The last part of that memory is feeling my mother's arms sweeping me up as she ran to me, wrapping me up in love and safety.

It was a moment of chaos, and that matters.  Not all moments are equal.

The story of Lent, and particularly of Holy Week, is also a story of chaos.  Jesus enters the city triumphantly, but then everything goes crazy.  He tears up the Temple, is hunted down by the authorities, there is torture and death and even his own followers in battle with the authorities, as a slave is maimed.  It was a week that the world changed.

Where did this chaos, all chaos, come from?  In part, the seed is within the readings for this week and last week.  When we read of the Prodigal Son, we heard a story of a man who felt, rightfully, that his hard work had been disrespected.  This week, there is the story of Mary pouring the oil on Jesus, with Judas objecting.

Judas, of course, is corrected by Jesus, before the whole group.  Shortly thereafter, he becomes a paid informant for the authorities, the one who is able to tell them exactly where to find Jesus at the most opportune moment.  Why Judas?

It was Judas for exactly the reasons that we chose cooperators or informants when I was a prosecutor.  We were trained to look for the person who felt disrespected, rightly or wrongly.  The chaos of Lent was driven by that simple truth; that those who feel unvalued often create chaos.

Is there a solution, a way to avoid this?

Of course there is, and of course it is on the very pages of this book.  In today's gospel reading, it is striking that Jesus sees the roles of the two women.  He sees their lives, their work.  Dr. Braxton was a student of Gerda Lerner, the Mother of Women's History who died recently, and that was her genius:  She urged us all to look and see what women were doing, so we can make them a recognized part of history.

The solution to chaos is seeing, knowing, and caring.

In Waco, Texas, there is a school that is named in honor of Prof. Rapoport's parents, the Rapoport academy.  It was a wonderful oasis of calm in an area too often plagued by violence and chaos.  I visited there one morning on a school day.  As I walked down the hallway with the principal, she picked a pencil up off the floor.  Turning to a teacher nearby, she said "isn't this Shaniqua's pencil?" and handed it off.

What a remarkable thing!  They knew the students down to their pencils.  That is love we get from God, and what we need to give to one another.  That is the answer to chaos.

Of course, we need to create that calm where we see one another clearly.  My colleague Susan Stabile continues to teach me that.

When I was here, and things got overwhelming, at times I would sit on the edge of the Sunken Gardens and watch the mist rise up.  It was beautiful and mysterious and good.  The Holy Spirit was there, I suppose, the Holy Comforter, a Mother's arms that wrap us up and make us loved and safe, as we must do for one another.

Comments:
Love the way your mind and soul work strolling or careening through moments hand in hand. This was remarkable. There was so much here. And all of it was vital. Thinking of you and wishing you well. Idi s Bogom.

Thank you for the 'Moment'

As I close my eyes I can feel the warm, loving enbraces of many so special and of those unexpected during days past and present - and, most importantly, Jesus' constant embrace that initiaites them all.

Thank you for touching my heart this morning! Your wonderful sermon will 'touch' many more. . .

Hope it goes well. I love that you post your sermons/talks.

It's interesting, mist is portrayed very differently in the Percy Jackson series (Greek mythology for kids): "The Mist is a type of magic or force that prevents mortals from seeing creatures, places or people from Greek Mythology, such as gods and heroes, and instead they see things that they would find normal. Their line of reasoning gives them explanations for most of the events that occur in the series. As said by Hermes in The Last Olympian, 'The Mist shows them anything but the truth.'"

I read those books!

Yeah, this is the opposite kind of mist...