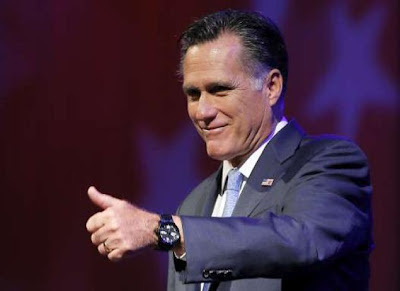 Tonight, at the Republican Convention, Mitt Romney will give the most important speech of his career. The hurricane is over, he'll be on prime time, and now he can make his case to the broadest audience possible.

How should he do it?

Comments:
I need only fawn longingly over my favorite size 10 jeans, knowing without a concerted effort, size 12 could approach 14 before 10 is once again savored. Is Mitt's challenge any more nuanced?

Washington is broken, all future inaugural honeymoons may last as long as a Mitch McConnel proclamation, Our goal should be to ensure the president only serve a single term...

If Romney can build upon Ryan's many falsehoods with an equally as fantastic campaign plea the dems are potentially doomed. Truth telling is required to rebuke much of Ryan's soaring oratory and the 7% undecided voters seem adverse to discernment seeking little more than feel-good 'sound bites' - could be trouble aplenty in Obama / Biden land...

When will a presidential candidate be willing to serve a single tern and face 'head-on' our nation's problems?

An exceptional speech may ensure crowning glory and gift wrap the trappings of the 'Office' - inauguration ensures realities trappings will be served each morning. How much longer can WE wait for our elected officials to begin producing solutions? Size 16, 18, 20???

1. Who am I? I believe in the power of love. I believe I am a better person because I married Ann. Her love saved me. We are blessed with an amazing family. Our love and God's love built that. I believe in America. I believe that hard work pays off. I believe that we are a great nation that can do better, if we come together and take our serious situation seriously.

3. I also think Barack Obama has not met the challenge of our times. Granted, he inherited a tough situation, but he has been unable to get his mind around the big issues facing our nation, and he has wasted three and a half precious years that we could not afford to lose:

5. Change is hard. I am the unknown. I understand. But when the known is unacceptable, change is the only viable alternative. There is no reason to believe President Obama will do anything different over the next four years from the last four years. We cannot afford another four years of sitting dead in the water.

Give me a shot. I will give you my best. I will not let you down.

He should start by condemning these two appalling episodes that occurred at the convention:

And then do exactly as Waco Farmer outlines. He would earn my respect and perhaps my vote if he did so.

How many election cycles now, the premise of voting for CHANGE proven not just ineffective and counterproductive but often times detrimental? Vladimir Ilyich Lenin “One Step Forward, Two Steps Back” anyone?

Waco Farmer - I think you need to replace Dan Senor as one of his advisors. What you propose is sane. It won't make me vote for Mitt, but it will allow me to dislike him a lot less if he wins in November.

He should say his first energy policy a week ago was a mistake, and now he really wants to get serious about moving away from fossil fuels and toward a sustainable energy policy. Oh, and he should acknowledge the existence of man-made climate change.

Is A Waco Farmer also a speech writer?

I would pay to hear that speech, and pay extra for the brevity.

Mitt Romney walks on the stage, hands waving to the adoring crowds shouting and dancing after his emotional introduction from an animatronic Ronald Reagan riding on a velociraptor (seen here: http://www.etsy.com/listing/103439513/ronald-reagan-riding-a-velociraptor-hq). He strides to the podium, smile beaming across his face, and he begins:

"Good evening fellow Republicans. I came here to do two things tonight: accept your nomination to run for President of the greatest country in the history of the planet Earth and kick some ass, and it looks like that nomination thing has been wrapped up, so..."

Drops the mic, backs away from the podium, music cracks and Stone Cold Steve Austin's intro music kicks in as Romney and Paul Ryan walk through the crowd, only pausing occassionally to do poses like this: http://chaddukeswrestlingshow.com/wp-content/uploads/2012/03/hogan_682_480266a.jpg

Finally, Romney and Ryan arrive back on stage and rip off their button up shirts to reveal tank tops emblazoned with the saying, "America: Back to Back World War Champs." They hold up WWE Championship belts high above their heads as Kid Rock's "American Badass" blares from the speakers and Bigfoot and Gravedigger (monster trucks) enter the stage behind them being driven by Dale Earnhardt Jr. and Jeff Gordon. All the while, pictures of Obama bowing to leaders of foreign countries plays on a huge screen behind them. They are joined on stage by Clint Eastwood, who, when the music goes quiet, gets on the mic and says, "I only have one question for President Obama, do you feel lucky punk?" Then drops the mic and Romney, Ryan and Eastwood do several of these: http://bronanthebarbarian.files.wordpress.com/2012/03/hulk-hogan-flexing.jpeg

Then they all walk offstage.

Done. Victory. Wrap it up.

You lost about 70% of Alabama's vote when you involved Jeff Gordon.

Waco Farmer - I think Marco Rubio read your post on todays Mayhem. He touched directly to points 1, 2 and 3.